Hobo Beer has been a staple of many a bar fridge for a while and it’s now been joined by a new cider sibling.

When Stuart Ekins and Richard Herbert, of Hobo owners CASK Liquid Marketing, told us they were planning on launching a cider extension of the BarLifeUK favourite Hobo Beer we were pretty excited, we were also a lot younger. 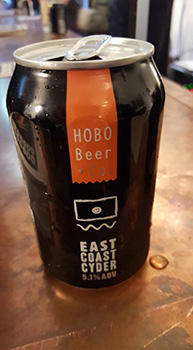 Despite our constant questions about when we would be able to get our hands on it they were not to be rushed. Last week during London Beer Week our patience was rewarded as Hobo East Coast Cyder was launched, and we have to tell you it was worth the wait.

Firstly let’s get the name out of the way, it is spelt Cyder due to the area of the country it is produced. They have funny ways in Suffolk but they do make good cider, in particular the Aspall Brewery which is who Hobo partnered up with for this particular drop.

Continuing with the Hobo Beer theme the cyder comes in 330ml cans and features the recognisable brand style, this time on a black can. Hobo’s in the US use a series of symbols to pass on messages about houses and towns they visited. On the beer cans the symbol stands for ‘Good Road to Follow’ on the cyder the symbol means ‘Unsafe Drinking Water’.

The apples used in the liquid itself are a mixture of cookers and eaters, consisting of Bramley, Gala, Cox, Russet and Johnny Gold. This is probably very important in the world of cider production but it is a little over our head.

Stuart had this to say (although we’re pretty sure he meant years not months):

‘After many months in the planning stage we are delighted to have finally launched Hobo East Coast Cyder in a Joint Venture with Aspall. Their knowledge of all things apple has enabled us to create, what we believe, to be the perfect cyder for all drinking occasions. Made from cookers & eaters, with a high juice content, the cyder delivers a medium-dry finish with enough punch at 5.1% ABV to carry the traditional flavours that cyder fans will crave. And it’s about time that cyder started to compete with the canned beer market!’

If you want to get your hands on some cans you can contact CASK Liquid Marketing through their website or give Stuart a call on 07970 515584.

In the meantime we found an online Hobo game where you get to beat people up, enjoy.