Nottingham has given us ibuprofen, HP sauce, the cassette player and Torvil and Dean, so they can surely give us awesome cocktails, right?

Nottingham was the last city to tick off my UK list of bar crawls and I was excited to see what the guys were gonna show me. My partner in crime was Kat from Campari, with a case full of Espolòn Tequila, our chosen poison for the night.. This was going to be a good Tuesday.

First stop was Rub Smokehouse, this BBQ restaurant is a party bar that is all about the good times. Their drinks menu is lengthy with various playful cocktails with the majority being aimed at those with a sweet tooth. Joe explained that they kept the students in mind when coming up with the various serves.  We’re talking bubblegum, bathtub glassware, chocolate pretzel garnishes and few appearances from fire – you get the picture. If you haven’t got a sweet tooth then grab a beer and stuff your face with their food instead. Their burnt ends (new on the menu) were BLOODY good, tender and juicy in a thick sticky BBQ sauce (don’t try and eat these without making a mess, just get stuck in). As these guys were clearly up for a bit of fun we got them to rustle up an Espolòn cocktail. 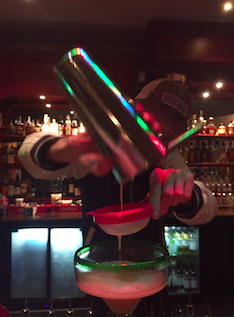 Joe McBeth grabbed the reposado and knocked out a Love Thy Neighbour served in a cactus margarita glass, naturally. I raised a suspicious eyebrow at the macadamia syrup as I couldn’t imagine how it would work with tequila, pineapple and prosecco but alas, it did, and we drank it all.

This cute little bar and restaurant serves caribbean fusion tapas and a whole lotta rum (clues in the title). With oak floors, exposed brick walls, grand framed blackboards, and fairy lights Rum House is a pretty bullet proof date spot. The atmosphere is nice and relaxed, but if you want something a little more vibrant then head up to the Bad Juju Tiki Bar, their tiki party bar with DJs and shed loads of Sailor Jerry. 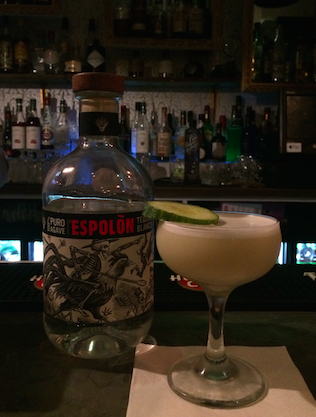 The cocktail menu at the main bar downstairs is always evolving, yet the bartenders are ready to whip up a drink to your taste if there’s nothing that screams out to you. With their eager to please attitude we handed them our tequila to see if they could make magic happen with spirits other than rum.

Rory let it slip he’d had a few too many heavy nights on tequila and wasn’t the biggest fan anymore, however he came up trumps with his creation, the Sour Cue.

As far as speakeasies go, this one has gotta be up there with the best of them. From the front it looks like a piece of junk boiler repair shop, I genuinely thought Kat had lost her mind when she walked us in there with a knowing look. However, head through the ‘staff only’ door and push through the wall with the fake sink attached and you’re in. Pat yourself on the back for being ‘in the know’ and get yourself to the bar. 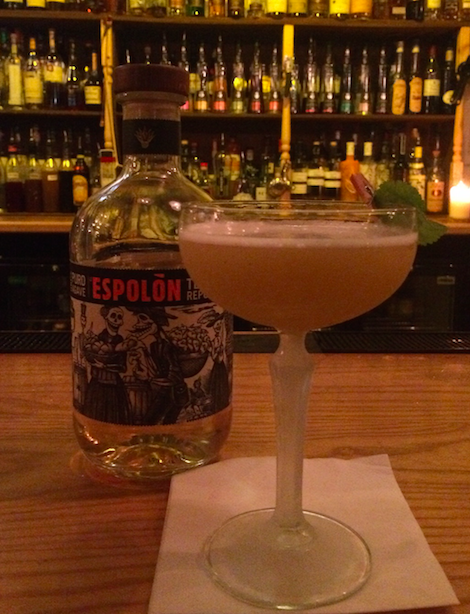 The place is pretty huge, and even on a quiet cold Tuesday night this place was heaving. With vintage furniture, dim corners and a huge metal cow skull watching over the bar, it definitely has the “cool factor”. The menu is laid out like a boiler instruction manual and is filled with obscure cocktails with some of the best names we’d seen in a long time. I went for the ‘Obi Wan Negroni’ (lol).

Jake was our chosen bartender to take on our tequila challenge, and boy did he deliver. He served us an awesome fiery drink he called the ‘A-chillies Heel”:

Open since 1999 and still going strong. This booze joint is open every night from 5pm and never close before 2am, plus their happy hour runs for FOUR hours. Mavericks. Basically it’s like the party version of Cheers, where everybody knows your name… always ready with open arms. Cool beats, bad ass drinks and good people is the aim of the game, a very non frills approach. The bar is long and narrow with a lit up back bar, pull up a pew and crack on. 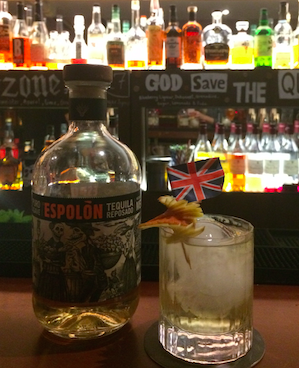 Liam took the brief to extremes and jumped in , whipping out drink after drink like he was a man crazed on tequila but they kept getting better. Our pick of Liam’s conveyer belt of cocktails was the Johnny Rotten, because it used blanco AND reposado, and Ehren’s Red Hot Chili Pepper was an absolute banger. His homemade red pepper syrup was so good we could have drank that alone.

Another decent speakeasy. Walk down the stairs past all the neon chinese signs as if walking through dodgey downtown alleyway and enter this eastern opium den. Come early and it’s a sexy cocktail bar, come later and it’s a nightclub for the students of Nottingham (the glass dance floor may have given that away). 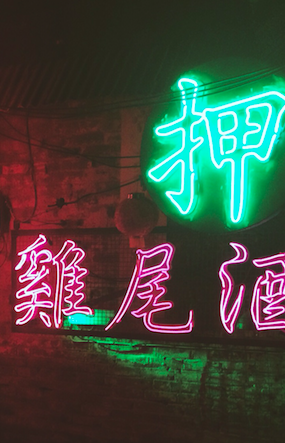 That being noted, the drinks in the menu can be a bit on the sweet side with a hell of a lot of elderflower. Give the kids what they want, right? But they are all made well, with home made infusions and fresh juices. The bartenders were all super creative and eager to show off so we handed them our tequila and let the competition begin. Mike Beedon experimented with a chocolate number that was so unique, indulgent and moreish he got the crown.

It was only fitting to end our bar tour with this new tequila and mezcal den in Hurts Yard. This rustic and colourful late night hangout is a bit of a bartender stomping ground after late shifts. The name stems from mythical gods that ancient aztecs worshipped. The 400 rabbits were responsible for guarding the precious booze of Mayahuel, a mythical fiery aztec goddess of alcohol. But enough about that, let’s talk about the drinks. The Jalisco was the perfect night cap made with jalapeno infused tequila, mezcal, splash of sherry, stirred down with agave syrup and celery bitters. I sipped this (a little too easily) while watching Liam McGarr crack on with his creation. Being a tequila bar, this was an absolute breeze for him. 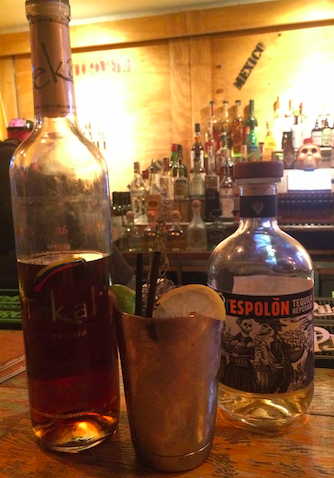 The result was the ‘Reversed Mai Tai’

Served with thyme and mint

So, our night drew to an end. The city is far more relaxed than London, with quiet empty streets and no real crowds I felt like i’d had a bit of a holiday. Until about midnight when hoards of students appear from nowhere, thirsty for booze! All in all Nottingham put up a damn good fight. The bar scene had some absolute gems and the bartenders off the cuff cocktails were highly creative and innovative. The city tends to get overlooked, with many bartenders having to travel miles to compete in the large cocktail competitions. However, it’s clear to see that they’re finding their stride and starting to catch up with the cities that are more established on the drinking scene! I predict good things. Watch this space. To be continued….