That’s it, we’ve had enough. It’s time to call out these bloggers writing for established magazines and newspapers online.

There was a time, not that long ago, when newspapers and magazines were printed. You had to go to the shop to buy them. They were written by informed, professional journalists. 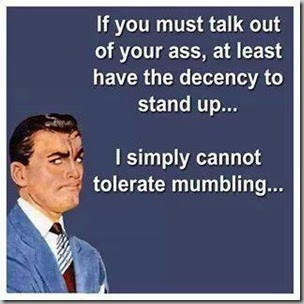 You didn’t always agree with what they said but you had to respect their training. The sports writers (I always read a newspaper backwards) had worked their way up from local papers to the national press, gaining contacts, skills and experience on their chosen subject en route. Political journalists, travel writers, editors and fashion experts were the same. They had done the hard yards, and more often than not, they cared about the quality of their writing, and believed that good journalism was important.

In recent years, the move to online (and we are not against online, the .com in our company might hint at that) has done many good things. However the glut of ‘drinks writers’ popping up on well-known, previously respected titles with no experience, journalism training or immersion in the industry, poisoning the minds of those that trust the companies they represent is not one of those good things.

The particular dick weasel that broke the camel’s back comes in the form of Sam Parker. Sam Parker is the Deputy Digital Editor (I thought my job title was bollocks) for Esquire Magazine in the UK. This is Esquire, a title that has included David Wondrich in it’s contributors in the US, for fuck’s sake.

Sam Parker has written an article entitled ‘Calling Bullshit on the ‘Modern’ Cocktail’ (check it out here). If you can’t be arsed to read it then here is a quick summary of its key points:

At this point it is only fair to point out that Sam Parker is far from the only ‘journalist’ who is at fault here. There is a long list of culprits, he just happens to be the badger’s ball sack that tipped me over the edge.

It is also worth pointing out that everyone is entitled to their opinion (mine being this guy should stick to practicing gråtrunk). I do however believe if you are going to represent a title that has built a reputation that people (rightly or wrongly) trust, you should at least be vaguely knowledgeable on the subject.

At BarLifeUK we don’t write about politics (Cameron is a cock womble), fashion (I have some lovely jumpers), US current affairs (Guns Trump Abortion) or any number of other subjects. We stick to what we know, and it seems right that others should do the same. I’m sure Sam has a specialist subject, how to use a thesaurus for example, maybe he should concentrate on it.

The growth of the cocktail industry is down to exactly the type of people and drinks he is calling out. Of course not all of them are hits, but it is the pushing of boundaries and making drinks more accessible to the masses that is changing the face of our industry…. for the better. Unfortunately people like Sam are trying their best to derail it.

The last paragraph of his ill informed article says it all:

‘Otherwise what we’re really participating in is the charade that the barman is as talented and important as the chef, that ten million years hasn’t been long enough to devise all the ways to drink alcohol that are worth bothering with, and that you, my friend, still haven’t figured out what you want and how to ask for it. Which in drinking, much like sex, is kind of the point.’

Bartenders are certainly as talented, and some would argue due to their customer-focused role, even more important than chefs, although this isn’t a contest (both are professionals in their fields who aim to give people a great night).

Unfortunately he is a bit off with the 10 million years comment, everyone knows that Adam invented the Negroni in the Garden of Eden and Eve used snake tears to create the bitters that first flavoured the Old Fashioned (for the record it originally had an apple wheel garnish).

10 million years? Fuck off. Just simply fuck off. Presumably he only drinks his wines from Israel, Lebanon and Armenia, only orders Stella, Grolsch and Kronenbourg and drinks water from a fucking pond. Although apparently 10 million years isn’t long enough to devise all the different ways to be a cunt.

As for his sex life, God help him. If he truly thinks that the point of sex is to ‘know what you want and how to ask for it’ then his hooker bills each month must be extraordinary, either that or his girlfriend/boyfriend has my full sympathy.

Can we please get people who know what they’re talking about writing articles for these magazines and newspapers. There are plenty of people out there (I’m guessing I’m unlikely to get picked now) with more than enough experience, skill and knowledge to promote our industry in the way it deserves.

N.B. – Sam has been used as an example for a whole lot of writers out there. Please feel free to think the same about all of them.