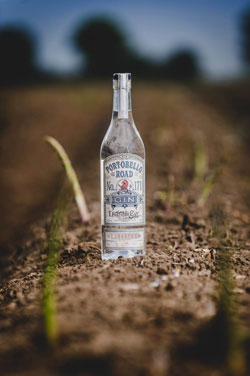 Unless you have been living under a rock for the last few years, you will be familiar with Portobello Road gin.

Founded by Ged Feltham, Paul Lane, Jake Burger and Tom Coates, its birthplace can be found at the Ginstitute, sitting above the Portobello Star, in Notting Hill – a joint that BarLifeUK have many fond memories of entering, and no memories whatsoever of leaving.

This limited edition ‘Director’s Cut’ distillation, is to our knowledge, the first ever London Dry Gin made with British asparagus. It contains a unique set of botanicals including asparagus from Cambridgeshire, harvested by Paul Lane this June.

The Directors describe it as “having the classic juniper forward character of Portobello Road Gin, but with a most unusual hint of asparagus on the nose and that distinct and sweet flavor right the way through the palate. The sweetness is counteracted by the dry, bitter character of the small amount of Gentaian Root which also has a slight mineral flavor (reminiscent of wet slate) with the spicy, long finish of Portobello Road and a punchy 47% ABV.”

We fired a few questions over to master blender, Jake Burger, about the new liquid:

JB: There was actually an Asparagus Gin liqueur available during the early part of the 20th Century, so we’re not the first to put the two flavours together, we think we are the first to do it as a London Dry Gin though. It’s a flavour we’ve offered as part of our Ginstitute selection for about a year and it received mixed but sometimes very positive reviews. It polarised opinion, not everyone is going to like it, but those that do seem to love it.

BLUK: The gin’s hashtag is #noitdoesnt (referring to asparagus’ reputation for making one’s wee smell weird). How was this tested?

JB: The qualitative testing was done in the very scientific surroundings of The Punch Room at The Edition and the corresponding bathroom. It definitely doesn’t. Don’t ask me why, ask a scientist. Probably something to do with the distillation point of the protein responsible – if I had to guess.

BLUK: How should we drink it?

JB: However you might drink a regular gin, though to really appreciate it perhaps away from the citrus based gin classics and more towards the stirred simple drinks.

BLUK: What is your spirit animal?

Jake has kindly provided us with a bottle of the Director’s Cut to give away to a BarLifeUK reader. Visit our Facebook group for details.

The Director’s Cut is on sale at www.portobelloroadgin.com.