Rum lovers unite. The guys behind RumFest have cranked things up a notch this year, brining you a whole week of the stuff.

That’s right, from Monday 12th October running through to the 18th, London will be filled with a series of rum themed tastings, masterclasses, parties, music and fine dining. 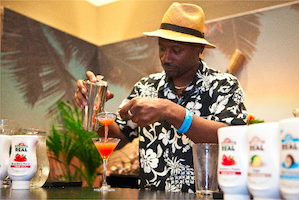 London’s top venues such as The Shard, Mahiki Club and Voltaire will be teaming up with a different brand to show people new ways to experience the spirit. There’ll be rum pairings with cigars and chocolate, and tiki cruises along The Thames.

Plus, to make sure they really go out with a bang, the whole week culminates in the biggest annual rum event on the Calendar, RumFest.

Ian Burrell, Global Rum Ambassador, wants to raise awareness of the spirit like never before and for people to embrace the vibrant culture of rum.

Here is a little taster of what’s to come:

Wednesday – Appleton Estate welcomes rum fans to an exciting tasting with Dave Morrison, Appleton’s senior blender who will be flying from Jamaica.

Thursday – Tiki on The Thames and an after party at Mahiki.

Friday – The Rum Experience University gets their geek on, and Boutique RumFest kicks off.

Plus, Gerry’s will be the official rum shop for the week, so head there for samples and 10% off all rum when producing your valid RumFest ticket. DEAL!

It’s going to be a banger.