The deadline to enter this years Funkin Innovation Comp is rapidly approaching, we sat down with previous winner Dan Redman-Hubley to give you some inspiration. 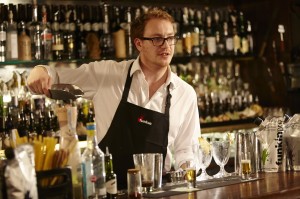 Two years ago Dan won in first Funkin Innovation Competition which saw him embark on an adventure working with Funkin. This years competition is live for entries on BarLifeUK (all the info can be found here) so we thought we’d see what this years winner can expect.

BLUK: How did you get the job with Funkin and who was the competition?

DRH: I won the the Funkin Innovation competition. I can’t remember who the competition was really it was so long ago but I remember getting sledged by Stu Hudson and Andrea Montague.

BLUK: What was your new product concept and did you get to develop it during your time with them?

DRH: I was of the opinion that anymore purees would have to be pretty obscure and thus not necessarily gain that much traction. My focus was on syrups which I felt was an area they could expand and also one that bars struggle to gain consistency with. I used a spiced syrup that could be used for winter drinks such as mulled wine and cider, hot buttered rum and also tiki drinks in the summer.

BLUK: What other products did you have a hand in developing (that you can talk about)?

BLUK: It seems that working with Funkin is a bit like a grown up Willy Wonka’s Chocolate Factory. Does it have that feel that any flavour is possible?

DRH: Thats pretty much it. Some times the number of flavours are a bit overwhelming but to have that access is a great opportunity. It also means that you can work with other spirit companies and there is never going to be a conflict of interest.

BLUK: What were the other highlights during your time there?

DRH: I think working with younger generations of bartenders is the really the highlight. You take them through the first stages in their cocktail education and make it accessible for them. At the same time you get to develop invaluable training skills. This is definitely the most rewarding aspect of the job. and seeing the first runs of a concept that was yours coming to fruition, excuse the pun.

BLUK: Anything else you would like to say to anyone thinking of getting involved in the competition?

DRH: It’s well worth doing, there’s some really good people on board and the company is going in a great direction and it’s a good time to be a part of it.

If you want to follow in Dan’s footsteps then head here and get involved, deadline for entry is August 24th.