We all talk about mixologists and distillers, ambassadors and brewers but a profession that slips under the radar in our industry just a tad is that of a cooper. 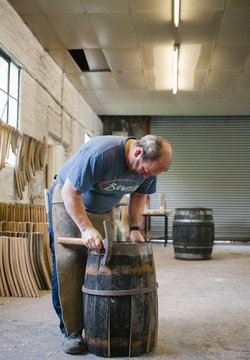 When we went to the Jack Daniels Cooperage and watched the men who had been there for 50 odd years, militantly making the barrels day and night, it was clear by the size of their arms that the work was somewhat gruelling – and we’re going to say rewarding too.

However, here in the UK it isn’t as championed as some would think, as Alastair Simms has just discovered. Alastair is the last master cooper in England (when he started 16 years ago there were 130) and at the moment he is searching for an apprentice to stop the ancient trade dying out. “People think it is a much easier skill to learn than it actually is. There is incredible precision involved. An apprentice would need to learn how to repair casts and make them, as well as work with different timbers an to measurements as specific as 200th to an inch. The skill of making the barrel is something that has to be cultivated and refined.”

So far there has been quite a low response. Making wooden casks and vats these days sounds far too much work for the younger generation. Alastair explains  “It’s physically hard job. Sometimes you get to the end of the day and don’t look as though you’ve achieved anything, but your body says different”. Plus with the salary on offer being a measly £21,000 AFTER completing the four year apprenticeship it doesn’t exactly excite the bank balance.

HOWEVER, the successful candidate would then have a skill that could see them travel across the seas to countries where the profession is far more celebrated. Plus they would be in damn good shape.

Think you’ve got the strength? Put down your cocktail, put in some elbow grease and send him an email alastair@whiterosecooperage.co.uk