A Trip to Burleighs Gin Distillery

When an invite comes through to visit Jamie Baxter at his distillery you don’t turn it down, when you find out you’ll be joined by some of Manchester’s finest you start to worry.

So it was we found ourselves on Loughborough train station with Jamie and part-time British Rail employee and Burleighs Brand Ambassador Chris Hoy. Through the rain appeared a series of tattooed individuals in shorts, it could only be Manchester bartenders. 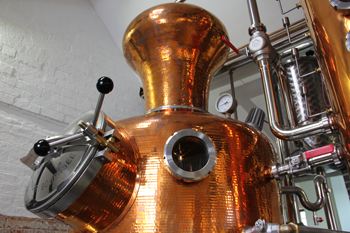 Messrs Lyndon Higginson, Alex Proudfoot, Bart Murphy & Murray Ellis were going to be joining us for a day of gin education, drinking and making…. what could possibly go wrong?

Now I’m a very conservative fella,
and I don’t go in for displays of emotion,
but I’m in love with a chick called Bessy,
and she cuts up whenever she takes the notion.

In the rural surrounds of a farm sits the 45 West Distillery, home to Burleighs Gin. In the unassuming old farmhouse building that houses the distillery sits a still. The still is named Messy Bessy after the Louis Jordan song that starts with the excellent lyrics above.

The still is a thing of beauty. She is a 450 litre copper pot still which was handmade by Arnold Holstein in Germany. With a top production rate of 25 litres an hour and a production run lasting 12 hours to create 205 litres she isn’t the biggest still but I believe some people say size isn’t everything.

A lovely still isn’t everything in booze world, you also need an expert pair of hands to produce great liquid and in the form of Jamie Baxter Burleighs have one of the gin greats. It was Jamie who came up with the botanical mix for Burleighs and took inspiration from a walk around the local woods (which also supplied the name).

Whilst on this walk he discovered dandelions growing and you can’t have dandelions without burdock so they both went into the mix. Also on hand was silver birth, iris and elderberries (although I’m still not convinced that the last one wasn’t included just so Jamie could make Monty Python jokes).

Jamie is at heart a gin purist so there was no way this wasn’t going to be a juniper forward gin (just start him going on gin’s that aren’t juniper heavy and watch him go – it’s good fun). He also knew he wanted to make a London Dry Gin – in case you’re confused you don’t have to make London Dry in London it’s just a style – so with this all in mind he went through the process of perfecting the recipe.

Rather than fiddling around with the recipe in Messy Bessy, which would have been a very expensive and time consuming business, Jamie got hold of a mini still and started to experiment in that. That mini still inspired another idea but more of that later.

The water for cutting the gin came from a borehole on the farm which goes through a reverse osmosis filter and a deioniser before being used. Water was sorted and recipe was done so it was just method that needed picking.

There are various methods which can be used in gin production and for London Dry Gin there are 3 main options:
Firstly you can add the neutral spirit (in Burleighs case wheat) and water to the still, put in the botanicals, heat it up and make gin. Tanqueray employes this method.
Secondly you can do the same process as above but simply steep the botanicals first before heating. This method is preferred by Beefeater.
Thirdly the botanicals can go into a separate container (called a gin basket or flavour basket) than the alcohol and water, it is the vapours produced from the distillation that pass through the botanicals and take on the flavours. This is Bombay Sapphires process.

On top of that are, among others, cold distillation (Oxley’s) or individual botanical distillation (Sacred) and if you want to not be a London Dry Gin then you can add flavours after distillation (Hendrick’s). It was the first of these options that Jamie went for.

Once the liquid has been made it is then cut with water to bring it to the right ABV and bottled. However that isn’t as easy as it sounds as Jamie explained.

See when you add 50 litres of water to 50 litres of alcohol you get somewhere around 97.5 litres of liquid. There is a very clever answer for why this happens but at its base the molecules combine with each other to take up less room, this effect also heats up the liquid making the container used warm to the touch.

All of this means that you can’t simply get a calculator out and add the water, there is a certain amount of trial and error every time. Also to mix things up the ABV of alcohol is is measured at precisely 20°C (unless you’re in the US in which case it’s 15°C). See it’s not as easy as it sounds this distilling lark.

As if to prove that last point Jamie had a treat for us all. You remember that little still I mentioned that he used to experiment with when coming up with the first recipe? Well he liked it so much a bought a few more.

They are now set up in the distillery so people can come along and have a go at distilling themselves. Each still rather perfectly produces one bottles worth of gin so armed with still, bottle, scales and a notepad and pen we were all let loose to create our own gin.

There was a huge variety of botanicals on offer and we all went in pretty confident in our abilities. There was of course a certain amount of bravado and a desire to create the best gin of the group.

There were a few ingredients Jamie ‘strongly suggested’ we all use. Obviously juniper was key, as were corriander seeds, you also need what is known as a stabiliser or fixative which can be either oris or angelica root (we went for oris).

Whilst we were waiting for the still’s to do their thing we enjoyed a Gin & Tonic as well as sampling the other two expressions of Burleighs Gin they produce on top of London Dry. These are the Export Strength, increasing the ABV from 40% to 47% and the Distillers Cut which contains the same 11 botanicals but with a higher amount of the floral, designed to work perfectly in Jamie’s favourite cocktail, the Martinez.

Once we were done we all tasted our products. I think it is fair to say we weren’t as blown away by our masterpieces as we hoped to be. Although Alex definitely won the worst of the day as he completely forgot to put any corriander in.

It was an excellent day and as we headed to the local pub for a drink or two after our stressful distilling initiation I, for one, was wishing I had a bottle of Burleighs Gin in my hands not my failed attempt. We certainly all left with even more respect for the art of the distiller than we arrived with.

Thanks to Jamie, Chris and the rest of the Burleighs team for a great day and it was, as always, a pleasure to hang out with the Manchester boys. If you get the chance to visit the distillery don’t miss out, it is a great day and Jamie will keep you entertained and informed throughout your time (for the record I would steer away from rhubarb in your recipes).