At the end of a hectic 4 days only one winner would be chosen to represent the UK at the global finals.

6 months ago we sat down with Stuart Ekins and Richard Herbert of CASK Liquid Marketing, they were excited, we’d seen that look before, it meant they’d had an idea, this was a worry. 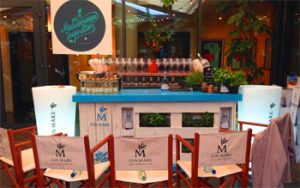 The idea seemed like a good one. Take over the Shoreditch Hoxton Hotel’s rather charming courtyard area in the summer and over a 4 day period hold the full UK heats for the Gin Mare Mediterranean Competition followed by the final (a process we usually take a couple of months to achieve). Oh and put on some parties in the evenings.

It seemed like a solid idea. Bringing bartenders from around the country together for a competition and a few drinks. We were in.

As I woke up on Friday morning to embark on our 4th day straight of judging I was beginning to question the sensibleness of this plan (I was also questioning the sensibleness of joining Gin Mare for some drinks the night before). Then I realised all my day had in store for me was sitting down and having 18 lovely Gin Mare drinks made for me, perhaps I’d survive after all.

Over the past three days we had judged our little hearts out and come up with an exceptionally strong final six. Our job now was to find not only the best on the day but also the bartender who could best represent the UK in the Global Final later in the year in Ibiza and hopefully bring back the big title that had eluded us in previous years.

We had a tough job ahead of us with a top six who could each easily fulfil that brief, they were:

Usually at this point we’d say that those six were in no particular order but this year Gin Mare had decided to do a live leaderboard so the six you see there are in order of how they scored in the heats. To separate and sort we were going to need some help so extra judges in the form of Stu Bale and Gin Mare’s own Jorge Balbontin joined BarLifeUK, Stuart and Leon Dalloway.

As in the heats each competitor had to make us three serves, a G&T twist, a Red Snapper twist and their own Mediterranean Inspired creation.

Adam kicked us off with Mediterranean ingredients running through all his drinks with Cava, melon, Rioja and olive brine all featuring. His Cava and melon twisted G&T was his stand out drink for us and the G&T of the day, alongside his always entertaining presentation style.

Fede explained that to him the Mediterranean is about a feeling and drew on his family in his presentation, not least in his Red Snapper which featured a gazpacho based on his mum and grandma’s recipe. It was his Med Inspired drink which stayed with us, a refreshing drink with a lot of depth and a look that would have everyone in the bar ordering it once one was seen.

Next up the overnight leader Sam B showed why he was in top spot with fantastic drinks backed up by a well thought out and informative presentation that left you in no doubt about why each element of his drinks had been picked. Both his Snapper and Inspired drinks were fantastic but the Inspired drink just edged it for us, using a local sloe berry liqueur balanced with the Gin Mare, salt brine and Rosa Vermouth.

Dan stepped up and if anything upped his game from the heats. His inspiration came from combining the mediterranean flavours with those english flavours he was more familiar with. He even managed to get us to like beetroot with his unique Snapper twist that we found ourselves going back for seconds and thirds of despite the addition of the worlds worst vegetable (beetroot just edges out cauliflower btw).

The penultimate contender was Nathan who had drawn his inspiration from restaurant El Bulli and included the line ‘Food is a necessity, drink is an indulgence’, well we were happy to indulge. We did so on one of our drinks of the day in the form of his Inspiration drink containing an El Bulli-esque list of ingredients including olive oil, fig & gin cordial, 40 year old sherry and of course Gin Mare.

Sam K brought the day to a close with a great presentation with the mediterranean at the heart of each of his drinks. His G&T was both simple and fantastic with an often overlooked part of the mediterranean in the form of Morocco coming through with preserved lemon at the core.

Picking a winner isn’t always tough in competitions but this time we really struggled, going backwards and forwards as a group. In the end it was Dan who just edged it with three drinks that will really give the rest of the world a run for their money when he steps behind the bar in Ibiza.

A huge congratulations to Dan for beating such a strong field and to everyone who came down to compete over the 4 days. A thank you to the incredibly patient and smiley Hoxton Hotel team for putting up with us and Gin Mare & CASK for putting on another amazing and innovative competition.

We will of course bring you all the news from the Global Finals in Ibiza.

Stir all ingredients with ice and strain into a chilled cocktail glass. Top with a Peashoot ‘air’ and garnish with a discarded lemon twist, fresh green peashoots and white pea flowers.

Roll / throw ingredients between two tins and strain into a highball with a salt spiced salt rim (crust style) over ice. Garnish with small cubes of smoked yellowfin tuna on a cocktail pick, thyme & a basil leaf.

First blend the soda water and the tonic syrup, then add all ingredients to a rocks tumbler over one large piece of ice. Gently agitate to blend the flavours yet still maintain effervescence. garnish with a large basil leaf, budding thyme and a small rosemary bud. On a cocktail pick place small cubes of mango dusted with long pepper and place this on top. serve arbequina olives on the side as an optional amuse bouche.