Over here in Sydney at the Bacardi Legacy global final the 34 competitors have been reduced to 8 for the grand final, we take a look at the semi-finals.

Let me start by confirming, as if there is any doubt, that the Bacardi Legacy global finals is simply an amazing experience. We are just over half way through now and I have more stories to tell than you have bottles of bitters in your bar. 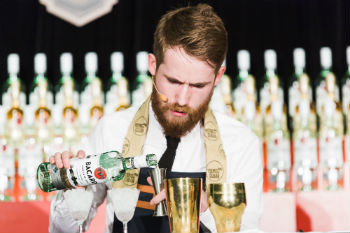 We will be bringing you a full look back at the trip as a whole in the coming days but today we are going to focus on the 34 finalists, their drinks and presentations in the semi-final stage. At the global finals all 34 competitors have to present their cocktail to a panel of judges as well as presenting the marketing campaign of their cocktail to a separate panel.

These two scores are combined and the top 8 from that go through to a final shake off in front of a different judging panel who pick the eventual champion. It is a gruelling and intense experience, everyone that goes through it gets my eternal respect.

We joined the crowd for the two days of cocktail presentations and watched every one of the 34 competitors and can honestly say we were entertained throughout by some of the best bartenders in the world. As you read through this piece you are going to see a lot of names you have never heard of, make a note of them as you will be hearing them again…. a lot.

A quick breakdown of the format was goes like this. Every bartender had 2 minutes to set up (with the help of their local Bacardi Ambassador) followed by 7 minutes to make two serves of their drink. They were judged on Presentation, Name of drink, Global appeal/longevity, Originality and of course the all important Taste/aroma/appearance.

The judging panel was, as you would expect, a pretty impressive bunch. Consisting as it did of David Cordoba, 2 previous winners in the form of Shingo Gokan and Lizzy Evdokimova, flair legend Nicolas Saint John and Eau De Vie owner Sven Almenning.

So that’s the boring technical bit done, let’s get into the comp.

‘This isn’t the shakes we’ve just got mild turbulence’

Barney Toy from New Zealand (although originally from Sheffield so the UK can claim him as well) uttered these words during an amazing presentation. His drink, The Pan Am Cocktail, is based around the party trips to Havana during prohibition. Barney is a larger than life character, anyone who walks on stage to Escape (The Pina Colada Song) and walks off to Come Fly With Me is a winner in my book.

However even Barney was affected by the magnitude of the occasion and he certainly wasn’t the only one. Karim Mehdi (Country: Ireland, Cocktail: Garrigue) led the table in emotional performances (see more on that here) closely followed by Alberto Riesler (Mexico, La Familia). Alberto’s family inspired creation resulted in a very emotive story and presentation which everyone in the room felt (he also managed to almost give himself a hernia squeezing fresh oranges on the bar).

When you consider that they were not only facing the judges but a room full of bartenders and journalists, various cameras and two giant screens projecting their images it is understandable that there were some nerves. However no matter how bad the shakes or the odd deep breath, every single one of them did themselves and their country proud.

The Bacardi Legacy competition is designed to not only increase the worldwide reputation of the bartender involved but also to produce new modern classic cocktails. As Maurico Allende (Finland, Ron-Con-Ton) so brilliantly summed up in the above quote this means the drinks have to be simple.

However what was consistently shown was just because a drink has to be easily replicable around the world doesn’t mean it has to be boring. We saw some really interesting uses of ingredients throughout the two days.

Frank Dedieu (France, Le Latin) stuck to his roots with the inclusion of white wine however he added a twist on that with olive brine and garnished the drink with an olive, a first for us in a rum based cocktail. The olive theme was continued by Jad Ballout (Lebanon, El Mediterraneo) who garnished his drink, which contained the growing in popularity ingredient of Mastiha, with drops of olive oil.

Lizaveta Molyavka (Belarus, Blush) deserves a mention for one of the prettiest cocktails of the day with the cranberry puree she used giving the drink an amazing colour. However strangest ingredient of the competition award goes to Xaris Darras (Greece, Clandestino) who managed to make Worcester sauce work in his serve.

If you are looking for global trends to come out of it then take a bow sherry, probably the most used non-traditional ingredient. St Germain also featured heavily (although Bacardi’s recent acquisition of the brand and the competitors savviness may also come into play there). For us though the most interesting thing was the use of fresh herbs. We saw fresh mint, no surprise there, but also fresh basil, tarragon, oregano and of course dill.

It really did go to prove that you don’t need 5 homemade ingredients, a bottle of pre-prohibition rye and some vermouth only made on one day a year by a blind humpbacked monk in a cave to make an interesting and inspirational drink.

‘Without Bacardi Gold I’d be making a god damn salad’

One of the biggest laughs of the 2 days came courtesy of these words from the instantly loveable (Cocktail Lovers Sandrae may well be packing him in her bag before she leaves) Regeri Zoo (Estonia, Four Seasons).

The brand is obviously key in these competitions and ensuring the drink enhances the brand is essential if you want to onto win. Whilst we didn’t get to taste the cocktails produced we did get to watch and listen to the integration of Bacardi into the presentations and stories.

The Bacardi Family was a recurring theme, Ran Duan (USA, Father’s Advice) did a fantastic job of linking the Bacardi history with his own family. He moved to the US at three and now works in his family’s own restaurant having recently had his first child. The similarities in their stories made a great presentation.

Eric Ballard (UAE, El Vestido) had taken the idea of family to another level with both his parents flying over from the US to support him. To really up the level his drink, based on the link between rum and raspberries, was served in glassware belonging to his Great Grandmother.

As always there was plenty of creativity with Emil Areng (Sweden, Pepin Cocktail) focusing on Bacardi’s former president Pepin. His ingredients all related to countries Pepin had set up new distilleries with lime (Brazil), maple syrup (Canada) and corn (Mexico).

Omer Shalev (Israel, The French Governor) also picked out an often overlooked character in the history of Bacardi in the form of José León Boutellier who set up the company with Don Facundo. Omer imagined an alternate universe where the French born Jose had not sold his share of the company back and had stayed involved, creating a tribute using French inspired ingredients.

‘Is there anything more fun than bananas?’

Erm… no? Denzel Heath (South Africa, The Lennox) is convinced there isn’t. His drink is not a homage to boxing but rather to his life as a bartender, being named after the first bar learnt his trade in. It has to be said in a field of very strong presentations Denzel stood out from the crowd for us, only just but sometimes that’s all it takes.

One of the best pieces of verbal picture painting I’ve ever heard came from Jonas Andersen (Denmark, Harlequin)  who described the Daiquiri as a dapper man in a suit from Cuba. Apparently Mr Daiquiri has hung around with some dodgy women in the past with stripper names like Mango, Peach and Strawberry. Pure gold.

Being a grumpy old bastard I’m not usually a fan of clapping when people shake in a competition (although conversations about what noises are applicable for stirring, throwing, swizzling and rolling have kept me very entertained in the past) however at Legacy I was like a seal at a Findus factory.

This was in large part due to the lines from competitors that got the crowds palms all excited. The first competitor Algirdas Mulevicius (Lithuania, Doremi) kicked off the trend with Hippy Hippy Shake blaring from the speakers on cue. Peter Chua (Singapore, Sugar Man) had probably the shake of the lot after announcing ‘My mum told me to shake from the hips’, going for the comedy angle for support. Simon Brandmayer (Switzerland, Cipango) went for the heartstrings with ‘This is the most important shake of my life’.

‘This journey is the most wonderful trip of my life’

Faye Chen (China, Gold Fashioned) summed up the thoughts of many as she created her lovely looking stirred down and brown drink (I think her parents might be part Bristolian). One of the reasons the journey everyone has been on is so wonderful is the people in our industry.

It was this fact that came across more than any other during the competition, summed up exceptionally well by our hosts competitor Alissa Gabriel (Australia, Bouteiller). Not only had she created a lovely looking cocktail (also inspired by the aforementioned Jose) but her video showed a series of Australian bartenders all posing with their hands together, this ‘Helping Hand’ gesture is designed to show the support she received on her journey as well as the help Bacardi have had during their rich history.

Karim Bibars (Poland, Maestro Smash) used people who inspired him past, present and fictional with Jerry Thomas, Alex Kratena and Brian Flanagan for his basil based creation.

You have been very patiently reading this (or just skipping until you see his name) to find out about Ally Martin. Our boy also used the industry as the base for his presentation pointing out that the support Don Facundo received in the early days is very similar to the huge support he received worldwide during his amazing campaign.

He also talked about the first Modern Classic with rum in its base, the Old Cuban invented by Audrey Saunders and how he wanted to focus on fresh ingredients which weren’t around when the old classics were invented. He received great support from the room and did a cracking job.

He did a great job (alongside his mentor May and extra advice from Shev) and we are reliably informed that he did an unbelievable stint in the Marketing Presentation part of the competition. When it came time for the final 8 to be announced we had no idea who was going to get through but Ally was surely in the running.

Unfortunately it wasn’t to be. Ally must have only just missed out, but miss out he did. In fact the final 8 was also missing both the US and Australia which came as a surprise to many due to the reputation the three countries have on a global level.

The final 8 however are all exceptionally well deserving and we can’t wait to see what happens tonight on the big stage when they battle it out to be crowned this years Global Winner and take Tom Walkers crown. Good luck to them all and you will of course be able to read all about it here soon. 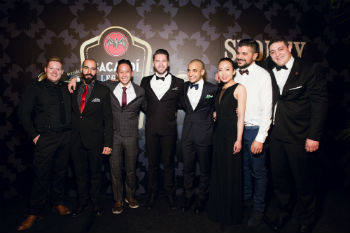