A Special Moment at the Bacardi Legacy Global Final

In Learning and Competition Prep

The 34 competitors have just finished their presentations at the Bacardi Legacy Global Final in Sydney and we wanted to share a story with you. 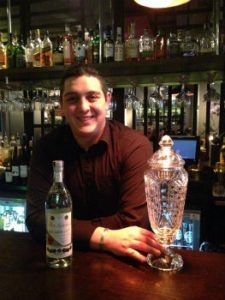 A full write up from the semi-finals will be on BarLifeUK tomorrow (or today, the time difference is a bit confusing) after the top 8 competing in Sundays final are announced later tonight. However during the semi finals one particular presentation really summed up what this competition means.

The person in question is Karim Mehdi representing Ireland with his cocktail Garrigue. He walked onto the stage which is, to put it mildly, a scary arse prospect.

You have in front of you a room full of bartenders and journalists, numerous camera men, two huge screens showing your image and a countdown clock plus 5 judges. It’s not any old judging panel either, it contains David Cordoba, 2 previous winners in the form of Shingo Gokan and Lizzy Evdokimova, flair legend Nicolas Saint John and Eau De Vie owner Sven Almenning.

As his countdown begun Karim took a big breath and then nothing. He said nothing, he stood there, staring out, a beat of time turned into seconds. The crowd reacted, applauding and cheering him. Willing him on, urging him to start his undoubtedly well rehearsed presentation.

The applause eased and he took another deep breath, smiled and started. It would be easy to view his rocky start as nerves but as he spoke it quickly became apparent it wasn’t nerves at all it was simply a moment where he realised where he was, what he had achieved and what he was about to do. It was a pure emotional overload.

Karim has been a finalist in the Irish Bacardi Legacy competition 6 times. He has never got to the global finals. Until now. This was the biggest moment of his career, one he had been dreaming of for 6 years.

As he told his story every other competitor in the room both past and present related to some or all of his journey. There were also several eyes being dabbed and the odd manly clearing of the throat.

When he’d filled the shaker he announced ‘I’ve been waiting 6 years to do this shake’. The shake he’d been dreaming about was met with the competitions first standing ovation. It was an outpouring of joy that he had made it and a really special moment.

As Karim walked off the stage every bartender within reach patted him on the back and shook his hand. He had not only done it, he had nailed it. Everyone was smiling and several were brushing away the tears.

I’m sure he had imagined that moment on that stage hundreds of times but never once in all those variations did he imagine that reaction.

Karim now has dozens of new friends and will be in the memories of everyone in that room for a long, long time. There is a lot of talk about family when people mention Bacardi Legacy and it is moments like that which make that talk a reality.

So Karim take a deserved bow, you made it buddy.