Gin Mare recently took a group out to visit their distillery and have some fun in Spain, BarLifeUK blagged a spot.

We have worked with Gin Mare for a few years now and have been lucky enough to hang out in Ibiza with them for the finals of their epic Mediterranean Inspirations Competition on numerous occasions but have never visited their famous distillery before. For those of you unfamiliar with the romantic story of the Gin Mare distillery let us enlighten you. 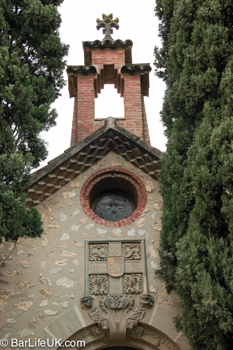 Around an hours drive outside of Barcelona on the Spanish Gold Coast (or Costa Dorada) sits a very pretty little town called Vilanova i la Geltru. On the beach sat a chapel used by the local monks to do their worshipping thing. Unfortunately the town was so pretty that it became a bit of a tourist haven and the locals decided that the home of the God worshipping needed to make way for some more sun worshipping space.

The monks were not to be perturbed and simply moved the chapel brick by brick up into the hills overlooking the village and put it back together again. Two weeks later the monks invented Lego & Ikea*

Come the 1950’s and the re-located chapel was converted into a distillery by the Giro Ribot family. Juniper berries were discovered growing nearby so the family took this as a sign to start producing a gin (having previously produced brandy and whisky) in the form of Gin MG, which went on to become one of the biggest selling in Spain.

So although Gin Mare is a modern gin, being launched in 2010, it has it’s roots in a long distilling family and in fact it was the grandchildren of the Gin MG inventor who came up with the idea of a truly Mediterranean gin in the form of Gin Mare.

Right history lesson over. The fact is the chapel distillery which produces Gin Mare is one of the prettiest and quaintest BarLifeUK has ever visited. It’s also one of the smallest, even for a trendy modern gin.

There are certain distilleries that evoke the history they have seen when you visit and Gin Mare certainly does that. The age of the building is obvious and the traditional paintings by Joachim Mir on the walls add to the beauty and story.

Finally the stained glass window above the entrance is surrounded by the phrase ‘Mundus appellatur caelum, terra et mare’. Our latin is about as effective as the England cricket team but we have been reliably informed it translates as ‘The world is called heaven, the earth and the sea.’

All these combine with the story of it’s history to make you daydream about what the building has seen over the years. As it turned out at the moment it was seeing a dopey looking English bloke looking around whilst sipping on a variety of distilled botanicals.

If you have tried Gin Mare you won’t be surprised to hear that the combination of unusual mediterranean botanicals took some time to chose and balance. In fact it took 3 years of experimenting with dozens of botanicals for the brothers, along with partners Vanguard, to perfect the recipe. 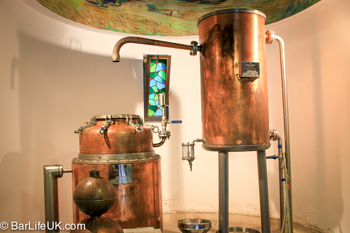 With the exception of the citrus all of the botanicals are macerated in neutral spirit for around the 36 hours mark then individually distilled in the 250 litre Florentine Copper Pot Still. The citrus are macerated for around 11 months separately in neutral spirit before being combined and distilled. All of these are then blended and bottled on site (in a slightly larger building admittedly).

They have the individual distillates in the distillery for visitors to try and they were all amazing. The Arbequina Olive distillate in particular is stunning and could be used on it’s own to make some fantastic drinks, the cardamom is so intense we strongly suggest you save that to the end of your sampling!

Tasting the finished product after the individual distillates really helps drive home the fact that, unlike some modern gins, you can taste each of the separate flavours distinctly even after they have been blended together.

After a few gin and tonics in the grounds of the distillery it was time for a night out in Barcelona and boy did the Gin Mare gang have a treat up their sleeves for us. 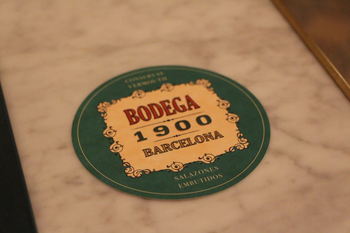 There is a chef called Ferran Adria who had a little restaurant called elBulli. Everyone who ate there said it was the best food in the world although it’s now shut so it can’t have been that good!

After elBulli Ferran wanted to do something a bit different so he opened two restaurants opposite each other in Barcelona. One is a traditional Tapas restaurant (with a few Ferran twists) called Bodega 1900, the other is a Michelin starred offering called Tickets.

The thought of eating in either restaurant was exciting enough but when we found out we were eating in both I nearly had a trouser accident.

The main event was in Bodega 1900 where we started with their superb house made vermouth before a succession of dishes came and kept coming. This isn’t a food site so I won’t go through each dish but if you are in Barcelona go. Just go.

However desert was to be served in Tickets, in their very own desert room (what you don’t have a desert room?). It was like walking onto the set of Willy Wonka, which considering what we were about to eat was very apt.

Gin Mare have, unsurprisingly given their botanicals, a close affiliation with food and worked with chefs at Tickets to create a Gin & Tonic Nougat. Now, creating a white chocolate nougat that tastes of G&T is one thing, and a thing they nailed, but getting it to have the same mouth feel is a whole different mission.

The chefs used a product which is close in effect to good old Space Dust but acts in a different way to give the sensation of effervescence you get from the tonic. The result was quite simply one of the nicest things we’ve ever put in our mouths!

The night carried on to a bar or two however it wasn’t exceptionally crazy as we had an early morning flight to Seville ahead of us for a visit to sherry country. More on that soon but if you like the sound of what Gin Mare get up to then you can be part of it through the Mediterranean Inspirations comp which is open for entries right now and will see the winner jetting off to Ibiza for fun and games later in the year. More info right here.

*This may not be entirely or even at all true