The 2015 Rookies gathered in London’s Cocktail Trading Company for the second session in their year long programme with a focus on Distilling and Vodka.

As they filtered into London’s newest bartenders hangout with cups of coffee gripped tight to fight off the cold and early starts it was like old friends being reunited. It had been a month since they had last been together and there was lots of news and stories to share as well as filling us in on what they had got up to after we left them at the end of the last session (dancing, red wine and jazz as it turned out). 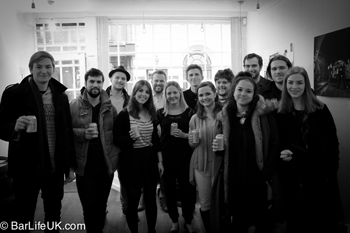 However the second session was going to dial up the intensity of training so soon the focus of the group was firmly on the days speakers. Each session of the Rookie Programme will focus on both industry and skills knowledge as well as an alcohol category with BarLifeUK and Mixxit hosting proceedings.

Due to the disparate levels of knowledge amongst those in almost every training across the land it is often the case that those less experienced and knowledgeable bartenders can suffer from a lack of knowledge of the basics whilst having strangely advanced knowledge of unusual spirits categories. This session was going to address that, first up a look at how spirits are made.

Mixxit’s Wayne Collins was on hand to talk them through the basics of distillation using his ridiculously large knowledge on the subject and a fancy powerpoint presentation. After a look at the definition of the word Distil:

Distil – to ‘drip’ – to purify (a liquid) by heating it so that it vaporizes, then cooling and condensing the vapour and collecting the resulting liquid.

Wayne moved onto a historical timeline of Distillation which helped the Rookies to understand how we have got to the advanced alcohol production stage we currently enjoy. Here are a few of the highlights:

Due to the limited time (and the amount Wayne can talk) it was the fermentation and distillation that was focused on, specifically looking at the two types of still – pot and column – and their different effects and advantages in the process of distillation.

As a treat for the Rookies, Amanda Humphrey had brought in some Maker’s Mark white whiskey straight from the still (unlike other ‘white dogs’ out there you can buy which have often been watered down to make them more accessible). This gave everyone the chance to taste the distinct flavour profiles of American whiskey straight off the still before being aged.

When BarLifeUK and Amanda sat down to plan this session knowing we were going to running a Distillation 101 session the spirit to focus on simply had to be vodka. There is no spirit more pure to the skill of distillation than vodka, and it provided a fantastic way to expand on the subject. 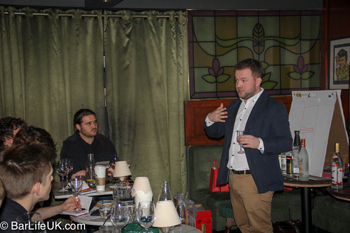 To lead the Rookies on a journey through vodka we pulled in Stolichnaya’s own Matthew Dakers and his unbridled passion for the bar industry and all things Russian.

It is difficult to talk about vodka without talking about the argument between Russia and Poland about who ‘invented’ it, in fact Poland took Russia to court to try stop them using the word (they failed!). You may expect someone who represents a Russian vodka brand to have a pretty one-sided view on this subject but as it turned out Matt had a very fair take on proceedings.

The history of vodka in Russia is very much tied into the politics of the country and Matt focused on his 3 ‘favourite’ Russian leaders in the form of Ivan The Terrible, Peter The Great and Catherine II The Great who each used vodka to control the Russian population in different ways and with varying levels of success.

It was then time for a tasting of not only a variety of vodkas but a look at various flavoured varieties. Flavoured vodkas tend to be frowned upon by bartenders but the simple truth is that the very first ‘vodkas’ made were flavoured. In the early days of production before distillation was as refined as it now is various flavours were added to make it more palatable and disguise the often dangerous levels of methanol that were present.

Admittedly there wasn’t much Raspberry, Pomegranate or Birthday Cake flavourings used, but still maybe certain flavours need to be readdressed by the bartending community.

When Maxxium first started the Mixxit programme Wayne devised a system to help introduce more inexperienced bartenders to the often overwhelming world of cocktails. With the Magnificent 7 not only did he achieve this goal but also came up with a system that can benefit all bartenders, especially when remembering large numbers of recipes or coming up with new recipes for competitions or cocktail lists. 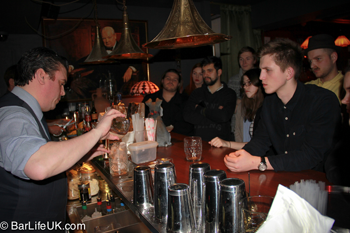 For example the Sour, Fix & Fizz fall into the Sour category and the Rickey, Highball, Buck & Swizzle belong to the Highball category. From here you can play with ingredients within those categories to create new drinks or easily remember classics. Take a Manhattan and replace the Bourbon with Scotch and you have a Rob Roy, swap that for Brandy and it becomes a Harvard etc.

Each month Amanda will be taking one of these 7 categories and expanding on them for the Rookies to increase their knowledge base of the classics. To kick them off Wayne got behind the bar and knocked out a couple of his favourites explaining the simple twists that could be made as he went.

Finally Matt knocked up a couple of Martini’s using the training he was given at Barcelona’s Dry Martini, seeing how one of the most renowned bars in the world train their staff was fascinating and we will be bringing a more indepth look at that in the next couple of weeks.

After a couple of cocktails and handfuls of Monkey Nuts from the guys at The Cocktail Trading Club we set out into the night for our first stop. As it was London Cocktail Week it seemed only right that we make a pitstop at the Hobo Beer pop up to enjoy a couple of Boiler Makers before heading to the main event for the evening. 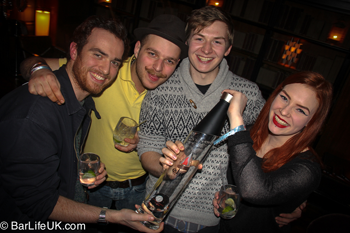 When you have vodka on the mind it is hard to see past an opulent venue like Novikov and so it was there we took the gang and the wide eyes as we walked into the venue showed it was the right choice. Whilst not the natural environment of BarLifeUK there is something special about bottle service when you are with a big group of people and Matt had certainly pulled out all the stops.

After a round of very tasty Stoli cocktails a magnum of Stoli Elite with all the trimmings appeared and in no time the Rookies were helping themselves and relaxing into the evening. In actual fact they relaxed so much the bottle disappeared in record time, followed by another, then another.

Needless to say it was a great night and as they disappeared into the dark streets we were already looking forward to hearing all the stories about their adventures at next months session.

With special thanks this month to The Cocktail Trading Club, Hobo and Novikov and all our great speakers.