Each year the Buffalo Trace Distillery releases 5 special editions from the vast array of barrels in their ageing warehouses, this years is on it’s way.

The whiskies in this collection traditionally win more awards than Miley Cyrus’ derriere and looking at what they have offered up for 2014 you’d be foolish to bet against them. 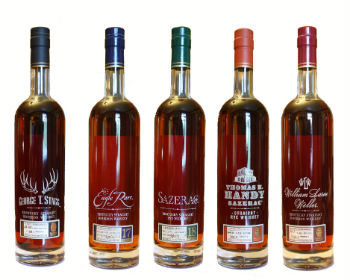 George T. Stagg
The 2013 release of this uncut and unfiltered bourbon received the prestigious Chairman’s Trophy at the 2014 Ultimate Spirits Challenge. The 2014 allocation has been slightly increased, benefitting from increased distillation starting in 1997.

William Larue Weller
The Antique Collection’s uncut, unfiltered, wheated recipe bourbon was given a “95” rating by Whisky Advocate Magazine last year. The 2014 offering was distilled in the spring of 2002 and at 70.1% proof is the strongest Weller release ever.

Thomas H. Handy Sazerac Rye
Uncut and unfiltered, the 2013 edition was named the World’s Best Rye Whiskey at the 2014 World Whiskies Awards. This year’s Handy was distilled in the spring of 2008.

Eagle Rare 17 Year Old
The previous edition of this bourbon was awarded a Silver Outstanding Medal at the 2013 International Wine and Spirits Competition.

The UK allocation is currently on it’s way to us and will be available mid-October through UK distributor Hi-Spirits. The allocation is always tight so if you want to get your hands on a bottle or three (or are struggling to think of a wedding present for Jamie Jones) then get hold of HI-Spirits sooner rather than later on 01932 252 100, email info@hi-spirits.com, or visit www.hi-spirits.com