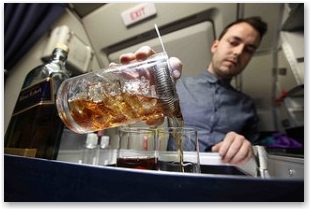 With the final chance to enter World Class opening on April 1st Diageo have announced the UK Final will take place on-route to Hong Kong.

Last year Diageo teamed up with British Airways to fly the 4 UK finalists to New York on a flight which saw them making cocktails at 30,000 feet for the chance to win a spot in the global finals. This year the partnership is back, only the destination has moved into Asia with Hong Kong the port of call.

As was the case last year, the 4 finalists will be competing mid-air on-board a shiny new A380. To mark the return of this partnership last year’s UK winner Gareth ‘Gaz’ Evans has created the official British Airways pre-flight cocktail to be served exclusively to customers at London Heathrow’s Terminal 5 (consisting of 25ml each of pink grapefruit juice, apricot liqueur and Tanqueray No. TEN gin topped with champagne).

With Burst One of the World Class competition already done and dusted Burst Two provides you with your last opportunity to get yourself on that plane.

The World Class tour recently hit the country and BarLifeUK popped along to the London forum to see what they had in store for bartenders this time around.

As always there was a great mix of entertainment and education on hand as the various brand ambassadors took the assembled bartenders through the challenges that lay ahead of them for the chance to compete in the up-coming Burst Two heats.

Each World Class burst gives bartenders three options for the drink they have to create to get into the judging element of the competition. First up was Tanqueray No. TEN Brand Ambassador Tim Homewood, who gave everyone a look at the re-designed bottle before outlining the Martini Challenge that was option number one.

The Martini challenge is as much about the glassware as the drink, and the uniqueness of glassware and its history is paramount in being successful in this case. Tim showed a drink he had created with this in mind, using a fancy looking glass he’d picked up on his travels.

Don Julio and Grand Marnier were next up with Deano Moncrieffe and Julien Lafond respectively on hand to talk about their brands and the Punch Challenge. They had put together 3 punches to inspire, however the challenge itself revolves around the number 5.

The punch has to be made with 5 ingredients (including Don Julio & Grand Marnier naturally), these ingredients must come from 5 different countries, the drink to be served out to 5 people and made within 5 minutes.

The final option saw Colin Dunn and Andrea Montague lead a tasting of 4 products from the Diageo whisky range and show their diversity in flavours and possible food matches. This challenge is all about flavour and sees bartenders being charged with creating a serve which ‘brings to life an exciting and unexpected flavour experience’.

The day concluded with Gaz Evans passing on his experiences and advice on how to win with Ketel One’s Dave Beatty playing Parkinson. As a final treat the Thinking Drinkers (Tom Sandham and Ben McFarland) performed a condensed version of their Edinburgh Fringe show which was superb even if the crowd had apparently had a humour lobotomy before they came on stage.

Entry is open from April 1st – 15th and you can get your cocktail recipes in via the World Class website right here. All entries will be judged in venue by a member of the Diageo World Class team and the top entries from each area will get through to their respective heats. We will of course bring you details on them all next month.

Good luck to you all.