Canada is one of the world’s up and coming cocktail countries and helping to gain that reputation is a recent opening in Victoria, British Columbia called Little Jumbo. The guys behind this venue are, good friend of BarLifeUK, Shawn Soole and his old protégé Nate Caudle. 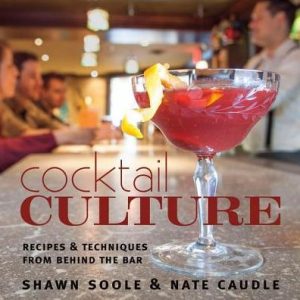 Not content with opening the most talked about venue in Canada in 2013 they thought they’d go and write a book too, some people are real suckers for punishment! Despite our best efforts we haven’t been able to make it to the bar but reading Cocktail Culture gave us a real insight into the Canadian bar scene and a renewed desire to get over there.

Cocktail Culture – Recipes & Techniques From Behind The Bar, to give it its full title, is a book aimed at the home cocktail experimenter as well as the professional cocktail bartender. As is tradition with home style books Cocktail Culture (CC) begins with a look at techniques and equipment which the experienced bartender can quickly skip.

Within each of these sections the cocktails are branded with a certain level of difficulty to ensure an inexperienced person in their kitchen isn’t setting themselves on fire and wondering what the hell a Ginger & Honey Shrub is. Bartenders ignoring the simple recipes however do so at their own peril, there are some absolute corkers.

In fact the recipes throughout are fantastic and really do give you a feel for the flavour trends north of the US border. It is the next couple of sections that really make CC stand out in the world of cocktail books however and shows the real drive of Shawn and Nate.

When most people write a book they do so to raise their profile and make some money, both damn good reasons as far as we’re concerned, however from reading CC it seems there is a third motive behind this particular title. Shawn and Nate seem to want to introduce the cocktail world to Canada and all of its great bars and bartenders.

With this in mind the next two chapters introduce the readers to the bartenders who have contributed and some of the country’s best bars.

The bartenders each get a full page to introduce themselves and you will find a few familiar names interspersed with some new faces. Whilst they seem to be predominately Victoria based (unsurprising as that is also both Shawn and Nate’s home) a lot of their careers have been spent in various cities across Canada and the rest of the world.

The bars are all Victorian based but again give readers a great insight into the scene and if a quick read through the details of the 10 featured bars doesn’t have you checking Expedia for cheap flights to Canada then you are a better disciplined than us.

The final section of the book is another full of inspiration for all bartenders out there. Packed with numerous infusions, shrubs, foams, bitters, syrups etc, which have been used in various recipes throughout the book.

The one that really caught our eye was the Green Tea & Serano Chili Amaro which will be being created in the BarLifeUK kitchen over the next few days.

There are so many cocktail books launching these days it is always difficult to know which ones to spend your hard earned cash on. Every one of them has its own uses and reasons to be on your shelf and Cocktail Culture is no different.

Most cocktail books written these days come from the US and UK however with the cocktail scene becoming steadily more global it is about time cocktail books began to mirror that. With Cocktail Culture Shawn and Nate have done just that and as such we feel it is a book you should seriously consider adding to your collection.

The true definition of classic tiki, this cocktail got its name from all the components being very traditional tiki: strong rum and sweet flavours, finished with pineapple juice. Sweet, spicy and with a big kick of rum, it’s all good juju.

Shake ingredients with ice and double strain over crushed ice. Serve in a tiki mug with pineapple fronds and lime slice.

In a pot over a medium heat, combine all ingredients and simmer for about 30 minutes, until sugar has dissolved and flavours have infused the syrup. Pour syrup, including the spices, into a bottle and refrigerate for up to 2 months.