La Quintinye Vermouth Royal, a new Vermouth from the makers of G’Vine Gin was launched to the world last night at London’s Café Royal.

The surroundings were more than a little opulent for a launch that BarLifeUK has been looking forward to since we got a preview taste of La Quintinye Vermouth Royal at last year’s G’Vine GCP finalsin Cognac. The Café Royal reopened last year and the refurbishment certainly doesn’t disappoint, it provided the perfect backdrop to the latest Vermouth range to hit the market.

It looks like we weren’t the only people looking forward to the launch, as the room was filled with a venerable who’s who of the UK bar industry (and Tim Stones). As well as the promise of tasting the new range and free Negroni’s, our hosts for the evening were undoubtedly also a draw with Jean-Sebastian Robicquet, Gaz Regan, Philip Duff and Nick Strangeway dressed to the nines and floating around the room – oh Jamie Walker was also about.

After a couple of warm up Negroni’s (gaz’s fingers were kept well away) we were ushered upstairs for a tutored tasting of the range by Jamie. Before he was handed the floor the founder of Euro Wine Gate (EWG) and master distiller of its brands – Ciroc, G’Vine and June – Jean-Sebastian explained the concept behind the adding of Vermouth’s to his stable.

The brand is named after Jean–Baptiste De La Quintinye, a botanist who was commissioned by King Louis XIV to create the famous Kitchen Gardens in the Palace of Versailles in the 1660’s. The bottles bear both his image and that of the gardens he created.

The range consists of, as you would expect a Blanc, Extra Dry and Rouge, all of which have their own unique qualities and definite place in any bar however it was the Rouge that appeared to be the favourite of our particular table of ‘experts’. They come in between 16% – 17% abv and in a move which shows EWG are a company that understand the needs of cocktail bars they are available in both 37.5 and 75cl bottles. 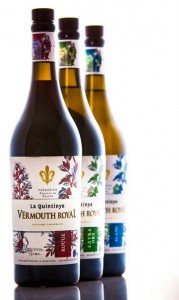 Since EWG’s inception Jean-Sebastian has put grapes at the heart of all of his products, as such it was, for him, the natural progression to produce a vermouth range. In this case the grape liquid at the base is Pineau des Charentes, a fortified wine made from grape Juice (must) and Cognac which is blended with white wines (the white wines are blended with white Pineau for the Dry and Extra Dry and red Pineau for the Rouge).

Added to this are a mix of botanicals, with a base of 12 added to all three in the range and each then benefiting from their own unique extra blend (a total of 28 plants and spices in the Rouge, 18 in the Blanc and 27 in the Extra Dry). Vine flowers from Cognac grapes have long been important to Jean-Sebastian and they once again play a part in the vermouth’s.

Another interesting ingredient contained within all three is Artemisia absinthium (better known in the UK as wormwood) which is a traditional ingredient in vermouth. This is a product that causes problems when exporting into the US, however Jean-Sebastian has never been one to compromise and he considered it far too important to leave out ‘How can you make a vermouth without it?’ he asked.

We will, as always, leave it up to you to decide what you think of them but if the mutterings of the assembled crowd were anything to go by we strongly suggest you give them a try.

N.B. Nick Strangeway also took the opportunity last night to announce a new initiative he is working on with Café Royal which is being done in Henry Besant’s honour and will provide support to bartenders in their hour of need. BarLifeUK will be bringing more details on this in the coming days and weeks.