A new limited edition rum has been released on the UK market in the form of Ron Zacapa Reserva Limitada 2013.

This is the first of a series of vintage limited edition rums which Master Blender Lorena Vasquez will be releasing each year. Ron Zacapa Reserva Limitada 2013 is a blend of rums aged between 6 and 24 years with an ABV of 45%. 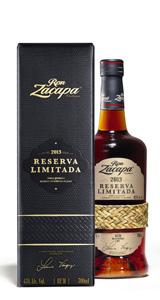 Those who attended the World Class forums recently would have had the pleasure of trying this new rum and the even greater pleasure of meeting Lorena herself.

Lorena (with expert translation from Zacapa Brand Ambassador Daniel Dove) explained the Solera ageing process, which is based on an old Spanish method of ageing sherries. Lorena’s skill lies in blending different ages of rums, which have sat in barrels that previously held American Whiskey, sweet sherry and Pedro Ximenez wine.

In the case of the Reserva Limitada 2013 the final stage consists of ageing the rum for a second time in sherry and charred American white oak casks.

As you would expect with such a unique rum there are not a huge amount of bottles to go around so if you want to get your hand on some we suggest you move sooner rather than later. Try begging, pleading or blackmailing your local Diageo rep or hit up Gerry’s Wines & Spirits, The Whisky Exchange or Selfridges.

If you want to try before you buy then a few select bars such as Artesian and The Connaught have a bottle or two.