If you like Bourbon then the annual release of the Buffalo Trace Antique Collection is a date that should be on your calendar.

Each year five special releases are launched from the 240 year old Buffalo Trace Distillery which this year was declared a U.S. National Historic Landmark. The Antique Collection itself was also recently inducted into the Spirits Journal Hall of Fame. 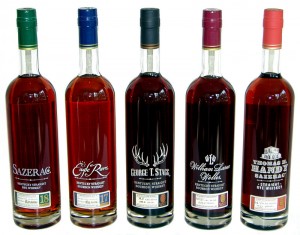 Eagle Rare 17 Year Old:  The 2012 edition of this bourbon won a Gold Medal at the 2012 International Wine and Spirits Competition, with the 2013 edition distilled in the spring of 1993.

George T. Stagg:  With the 2012 edition named the “World’s Best North American Whiskey” at the World Whiskies Awards, the 2013 edition of this uncut, unfiltered bourbon was distilled  in the spring of 1997.

Thomas H. Handy Sazerac Rye: An uncut and unfiltered straight rye whiskey, the 2012 edition was named “World Whisky of the Year” in Jim Murray’s 2013 Whisky Bible. This year’s edition was distilled in the spring of 2007.

William Larue Weller:  An uncut, unfiltered, wheated recipe bourbon, the 2012 edition was named the “Second Finest Whisky in the World” in Jim Murray’s 2013 Whisky Bible.  The 2013 edition was distilled in the spring of 2001.

Mark Brown, the president of Buffalo Trace parent company Sazerac who was recently in the UK had this to say:

“We’re very excited about the growth of American whiskey in the UK, and especially the emergence of consumer and trade interest in premium and super premium Kentucky Straight Bourbon Whiskeys and Kentucky Straight Rye Whiskeys”

If you want to get your hands on these products move quickly as quantities are limited, call UK distributor Hi-Spirits on 01932 252100 or email them at info@hi-spirits.com

Once you have them feel free to give BarLifeUK a call, we’d happily help you try them!!