BarLifeUK were recently invited along to Camden to help judge the final of the Camden Cocktail Club comp at Café Chula.

This great initiative has been running for the last 6 months and has been supported by the folk at Amathus Drinks. Some of Camden’s best venues got involved – Lockside Lounge, Café Chula, Joe’s, Made in Camden, Kentish Canteen and Shebeen Cocktail Bar – to battle it out. 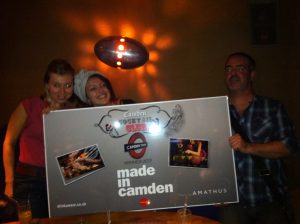 Over the 6 months they competed across 6 heats and the final using a variety of brands from the Amathus Drinks portfolio – Flor de Cana, Alipus Mezcal, Cabrito, Germana Cachaca and Clement Rhum.

Whilst we hadn’t seen the heats it was very obvious at the final that the competitions has helped bring the Camden bartending scene together, given everyone a lot of practice in the competition format and most importantly have a whole bunch of fun in the process. The drinks were certainly not a let-down either and the banter kept the crowd well entertained (that and a couple of Paloma’s).

The scores  from the heats and final were collected and collated before the winners and second place were announced. Up for grabs was £600 for the top team and £300 for the first losers.

Taking out the prize and the bragging rights in Camden was team Made in Camden consisting of Rebecca George & Adam Idrissi beating team Kentish Canteen of Louis Lebaillif.

Congratulations to everyone involved and to Amathus for supporting the events.