The Underground Punch Pong League (UPPL) has teamed up with MONIN to launch the Bartenders Challenge Cup nationwide.

It seems that JJ Goodman’s complete inability to play softball hasn’t put him off all ball sports (jokes on a postcard to JJ Ball Gags, LCC, Plums Place, London) as he has created the Underground Punch Pong League. 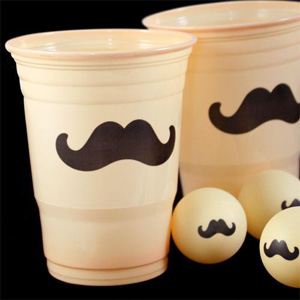 In short the UPPL is a revised version of the American Frat Boy pastime of Beer Pong. For those unfamiliar with the concept, it is a game mixing skill with the ability to drink (although presumably being American they use Light Beer therefore making it purely a game of skill).

An 8ft long table has 10 cups at each end and teams of two take it in turns to throw a ping-pong ball into said cup. Get it in the cup and the opposing team drink the beer. Hit all 10 cups and you win.

Punch Pong follows similar rules with the exception, which the quicker of you may have already spotted, that instead of beer the cups are filed with punch.

For the UPPL’s first event they have teamed up with MONIN to launch the Bartenders Challenge Cup, which will see them travel to 12 heats across the country for the regionals before a grand final in October.

Each heat will see 8 teams going head to head, and no doubt settling some scores in the process. Each team will have to create 1.5 litres of punch for the day using one of the MONIN range of flavours.

The winning team from each heat will be invited to Covent Garden Cocktail Club for the grand final where the overall winners will win a day trip to Paris for the two team members plus two other members of their bar team.

The regional heats are…

So start playing with your balls as this is a real testes of your skill. The crowds will gonad as you step into the arena so it would be nuts not to practice.

With that out of my system time to let you know how to enter, and learn the myriad of other rules. That bit is surprisingly simple, just visit the Punch Pong website and get involved.  Don’t forget there is a trip to Paris up for grabs where you’ll be able to visit the Louvre and see the Royal’s family jewels….