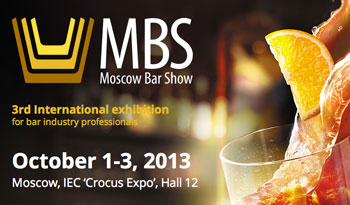 Nearly 8,000 visitors attended the Moscow Bar Show in 2012 and, with the recent ban on all consumer advertising of alcohol in Russia, it seems likely that attendance will be significantly higher this year.

Expect presentations and demonstrations from some of the world’s leading bartenders and muckety mucks, many appearing in Russia for the first time, as well as the usual product and cocktail sampling stations.

The MBS Cup, a bar team competition for all Russia/ CIS bartenders, returns this year as well. The competition is run by Moscow Bar Show in association with Moscow’s Bartender Brothers. The winners score a trip to London for a tour the city’s best bars.

For more information on show features, and how to attend, visit the Moscow Bar Show website.

Yael Weisberg, formerly a london doorbitch and currently an NYC brand strategist, spends most of her time at 35,000ft travelling between New York and London.