Terry Cashman: A Treatise on Profanity 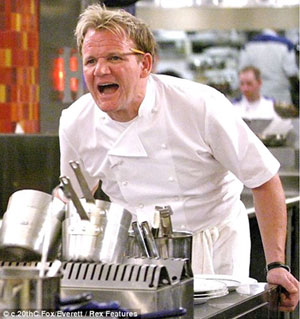 Ever since I was a kid, I’ve found swearing endlessly fascinating and amusing.

Foul-mouthed tirades by fat, tracksuited women in supermarkets at their horrible kids will have me crying with laughter.

I’ve always preferred comics like Jerry Sadowitz and Louie CK, guys who push the limits of what you can say in front of people. And who doesn’t appreciate a well thought out obscenity said in pain?

Biologically speaking, there’s a bit of your brain that responds pleasurably when you swear, which is why it feels good to shout ‘AAARGHSHITONMYFATHERSBALLS” when you hit your thumb with a hammer. Can’t argue with science.

I’ve always found people who don’t swear a bit odd. Much in the same way that men under 40 who wear cardigans seem a bit off somehow. Not enough that you mention it, but y’know, something’s not quite right.

Nuns and pensioners and that I can understand (not swearing, AND cardigans), but regular people? You’re just not my cup of tea thank you. You’re on the list with people who say two ‘ice’ rather than ‘ice cubes’. Oxygen thieves the lot of them.

So if it feels good then do it right? Well… maybe, maybe not. If we relocate this argument to the bar world (This is BarlifeUK after all), as a professional environment obviously the accepted wisdom is no swearing. I’ve let slip a few bad words in front of various management types over the years and received nothing but grief for it. But is this traditional viewpoint still suitable as a catchall rule for everyone?

Personally, if I went to the Savoy and heard Erik Lorincz shouting for ‘More fucking ice!’ I would be mildly surprised to say the least.

Not offended, but it would definitely merit a raised eyebrow. There is a standard to be upheld in particular establishments.

And sometimes it can be incredibly jarring to hear someone swearing for the sake of it. But in a more relaxed atmosphere, I think the vast majority of people who go to bars wouldn’t bat an eyelid to the occasional bit of bad language.

I’m not advocating welcoming patrons into your bar with a hearty ‘Evening yer Cunts!’ but a little peppering among genial conversation if that’s how you usually communicate? Perfectly Ok I reckon.

If I’m trying to have the best possible rapport with someone, surely I should be myself as much as possible. If we present a perfect construct of what we think customers want in a bartender’s personality, as opposed to just being ourselves, nobody has fun, and I think a big part of that is language.

I toned down my accent for years because I thought cockney’s not how professional bartenders were supposed to sound, and (I realise now) my rapport with customers suffered as a result. Maybe that’s what it all comes down to in the end, that we’re presenting an image we think the civilians want to see, when really they want to be in Cheers… that is to say, Late Night Cheers directed by Tarantino… Where everybody knows your motherfucking name.

I guess what I’m trying to say is, this above all: to thine ownself be true, even if you’re a cunt. And that is (partly) Shakespeare, a man who really knew how to swear.

Terry has been working in the bar world in the UK and NZ for 8 years on and off, most recently at Rushmore group (Match), the Hoxton Pony. Terry can now be found behind the stick at Callooh Callay. Oddly enough, a Londoner actually from London...