The team from Callooh, made up of Andrea, Rebekkah Dooley and Terry Cashman travelled to Barcelona, to do a ‘Mad Men’ themed Pop Up with Buffalo Trace Bourbon.

The team were greeted, after the joy that is flying Easy Jet, at the airport with a tub of ice-cold beers, by their cordial host and organiser Jorge Balbotin, to be whisked away to his retreat in the mountains.

After a stunning hour long drive up into the mountains, taking in vineyards and olive groves, including the picturesque village of Sant Sadurní d’Anoia, the capital of Cava production, the team arrived to unwind and prepare for the event the following night.

The only discernible downside to this drive, was that as they got further into the mountains, the mobile reception decreased to the point of non-existence; something that crippled Rebekkah’s mastery of social media. This made her very uncomfortable, to say the least.

Upon arriving at the farm, the team were greeted by two gigantic hounds and a diminutive Vietnamese potbelly pig named Morales, which was kind of ironic as they later learned, he had quite loose morals when it came to his sexual preclusions towards one of the dogs. This information and Morales’s almost superpower like strength to size ratio made for a very troubled night sleep for Terry. 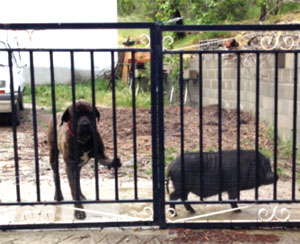 Rapist pigs aside, the team settled in, beverages in hand and tapas on the table, for a briefing, from Jorge, on how the next 48 hours would run. The aim of day one would be to relax and get into the Spanish frame of mind, whilst preparing any of the ingredients needed for the next days Pop Up.

The following day they would head down to Barcelona, stopping in to visit the Gin Mare distillery in the morning, before heading to an apartment next to the bar to relax and get ready for the Callooh Callay Pop Up. The night would begin with a master class on Buffalo Trace Bourbon, followed by a Q&A with Andrea on all things Callooh Callay and creating drinks and menus. This last bit was an unexpected addition and a big surprise for Andrea.

The team were told not to worry about bringing any equipment for the event, as they would be able to choose from any of Jorge’s, and it was quite a collection. The man has that many gadgets and things in his kit; it makes Dean Callan’s look almost normal and anyone that has seen Dean give a half hour presentation on his bar kit knows that is no mean feat.

Over the next ten hours, the team ate, drank and relaxed whilst pottering about with the tasks at hand. Andrea pitting 500 cherries, to make a puree, as they couldn’t get hold of any.

Rebekkah feeling very good, as Jorge had Wi Fi and Terry gathering the equipment they would need for the Pop Up, whilst always keeping an eye on Morales’s where about. (Funny side note, the next day as Jorge and myself were getting the last of the equipment ready, we found 2 litres of black cherry puree in the freezer. Something, which he made me swear, I would not tell Andrea. Sorry Mate.)

So after an amazing BBQ and great wine, the team finished off the last of the prep and prepared for bed with a digestive Old Fashioned flavoured cup cake, with pink Buffalo Trace bourbon icing and a wine glass of Gin Mare and tonic, then settled down for a good night sleep (Well apart from Terry).

The following morning the team arose to breakfast, loaded the car, said goodbye to animals and headed down from the mountains, to continue Callooh Callay’s march towards global domination. 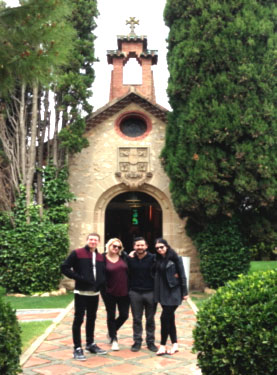 First stop, the Gin Mare distillery, who Jorge happens to also be the global ambasador for. While enjoying a bruch time gin and tonic, Jorge filled us in with some history of the distillery. The distillery is situated in a beautiful little chapel, that as history would have it, used to be next to the beach, but as the village became more popular as a holiday destination, was in danger of been destroyed.

As it were some wandering monks, from the order of Chartrueuse, just happened to passing by, on their way to Taragona and decided to save it. Yay. They rebuilt it in its current location stayed for four years, then left to go and slay dragons and fight their Shaolin bretheren, being warrior monks at that point.

After an informative, yet relaxed discussion on the history and production of Gin Mare, including tasting all of the single botanical distallets, that make up Gin Mare, with Jorge and the Master Distiller, the crew bid the distillery farewell and marched on to Barcelona.

After a leisurely 20 minute drive along the coast from the distillery to Barcelona. The boys and girls grabed a quick lunch by the beach, then it was on to the apartment to unwind, after their hard day, gather their thoughts and put their game faces on for the masses, that were starting to descend on Slow Bar, to check out what Callooh Callay was all about.

With everyone mentally prepped and dressed to the nines, in true ‘Mad Men’ attire. The girls looking very sexy in some great vintage numbers and Terry rocking a three piece velour suit, or as he described it, “A cross between velour and courdoroy”. As bad as it sounds, it was actually pretty cool. It was off to Slow bar to set up.

The team were joined here, by Calloohs’ owners Richard Wynne and Kate Crunchley, who had jetted over, to experience the fruits of their labours, or in their own words “It’s our bar, we want the fun of going on these trips as well”.

After a less than relaxed hour set up, Setting up someone elses bar, to do your own drinks, using the medium of mime and spanglish to find everything, is harder than it sounds, It was time to begin the nights festivites. The Callooh Callay ‘Mad Men’ Pop Up with Buffalo Trace Bourbon was open for buisness. Whoop Whoop!!!!!

To begin proceddings, the night started with a Buffalo Trace Bourbon masterclass, with Jorge acting as MC and translator. This flowed into a Q&A with Andrea on a range of subjects, from Callooh Callays’ continuing success, winning awards, menu design, staying ahead of the curve and future trends. The audience were really appreciatve and receptive of been able pick the brains of the team and owners, of such a successful bar.

After that it was time to get down to business. The business of getting down, exactly what the guys from Callooh Callay do best. For the Pop Up, Andrea had put together a selection of some of the most popular Bourbon based drinks from Callooh Callay and sister bar Beard to Tail, along with a couple of new creations from both Terry and herself, all sporting some very tounge in cheek ‘Mad Men’ names. 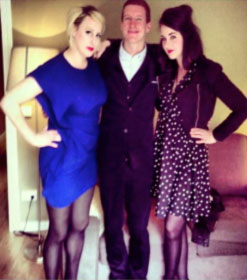 The beverages flowed, the tongues got looser and the guests took full advantage of having the Callooh crew as their hosts for the night, with every one working their way along the bar and menu. One highlight was a paticular young lady, asking Terry a range of questions, in some of the quickest Spanish I have ever heard. When he relayed that he didn’t speak Spanish, she then tried to mime her questions. At the same speed she spoke them. The look on Terry’s face was priceless.

As the night wore on I popped out for a quick cigarete with Kate and Richard as a ruse, to duck off for a quick drink at Dry Martini, which was just round the corner. All in the name of research. We were promptly served three, very tasty, ice cold, Dry Martini’s, in the time it takes most bartenders to put together three average spirit and mixes. Tasty beverages they were.

We then met Andrea across the road from Slow Bar, for some tasty tapas and beers, before she jumped back behind the stick. It struck me that we could enjoy such tasty, cheap and realitvley healthy food, with a nice cold beer, all served after midnight.

It made me think this is something I only enjoy when I travel. Why? What the hell is wrong with you London? Why is this something that is possible in almost every major city in the world, the ability to serve good food in a relaxed environment, late. All London can offer after midnight is shitty kebab and pizza joints? Anyways probably something for another article. Rant over.

Just after we got back into the bar, the team were releaved for the night. Job done and quite succesfully by the feel of the room. It was then time for a couple of ‘staffies’ and a lock in at Slow until the wee hours.

Everyone rose the next day feeling a little groggy, but generally pretty good. It was then on to some excellent tapas for lunch, before heading to the airport and back to not so sunny London. Something which the team were not that happy about, to be honest.

All in all, an amazing three days was had by everyone. The team from Callooh Callay demonstrated why they are regarded as one of the best bars in the world, with their ability to be taken out of their bar and comfort zone and still rock out a great menu and awesome night in another country. Hats off to them. Big shout out to Jorge and Buffalo Trace Burbon, for having the foresight to try and put something as fun and creative like this on.

Stay tuned for the next of Callooh’s global adventures.