The Upstairs Bar at Callooh Callay have taken us to Paris and Mexico and now in partnership with Bols they lead us to the home of Genever, Holland.

They’re a busy bunch this Callooh Callay lot, with trips to Amsterdam and Barcelona to run bar takeovers alongside new menu launches and being nominated as one of the best 4 cocktail bars in the world at the Spirited Awards. However it was the journey to Holland that inspired them to Bols-ly go where no-one had been before and help spread the word of Genever to their ever willing to experiment clientele. 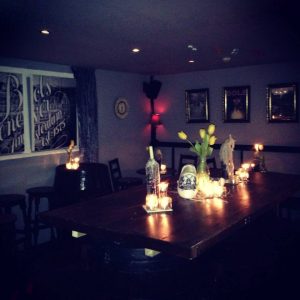 Some of you will know The Upstairs Bar as its previous incarnation Jub Jub and others of you will know it as a Mexican Cantina however for the next month it is a quirky take on a traditional Dutch Gin House.

You can expect some great cocktails (I was there on Friday and can attest to this) as well as some superb Genevers that aren’t available in the UK such as Zeer Oude, Corenwyn, Bols Barrel Aged and Corewyn 4yo. However if you want to get really traditional then a Kopstootje is the way forward, meaning ‘little headbutt’ it is a beer and a genever shot with the first sip of the genever taken hands free.

As if that wasn’t enough there will also be some traditional Dutch food on hand (it ain’t healthy but damn it’s tasty) plus a Pub Quiz, tastings with genever expert and Bols master distiller Piet Van Leijenhorst and plenty more fun and games.

It will be open Tuesdays – Saturdays until July 4th, if you want to check it out email info@calloohcallaybar.com to book a spot.