The northern bartending elite came out in there droves on St. George’s Day for a competition with a difference.

Self branded northern gin Langton’s No.1 joined forces with iconic northern brand MOJO at their Liverpool site to raise awareness for Hospitality Action, a charity that work with people from our industry who have fallen on hard times, whether that’s through injury, addiction or any other kind of misfortune. 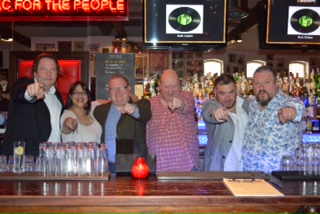 To support Hospitality Action, Langton’s simply asked any participating bar to sign up to a one year membership of the charity, a cost of a fairly humble £50. In return, they would give each bar that signed up a bottle of Langton’s for the chosen competitor to practice their entry drink.

The deal was such; create an original serve using Langton’s No.1 as your main ingredient and make two of them in five minutes (time constraints that were to be taken very seriously in this comp). The prize for the winner? A full Alessi bar set, a meal for two and a nights stay at a 5 star establishment in the Lake District and your drink being used as Langton’s signature serve on their summer campaign, as well as two cases of Langton’s for your bar. Not too shabby, I’m sure you’ll agree.

As the running order was drawn, MOJO bar owner Mal Evans was doling out G&T’s fast and furiously to our 15 nervous competitors, who were:

Shakers at the ready as we seat our judging panel; Nick Dymoke-Marr, creator of Langton’s No.1, Paul Askew, Head Chef and Proprietor of top Liverpool restaurant The London Carriage Works and industry legend Mr. Jake Burger, who knows a thing or two about gin these days I’m sure we can all agree.

Over the next couple of hours and to the tune of The Divine Comedy’s Gin Soaked Boy the judges were entertained by the famous Scouse banter and kept well oiled with fifteen varying juniper based creations. Classic combinations of gin and voilette were brought out. As well as twists on everything from a Negroni to a French 75. But alas, there could only be one winner….

…Or so I was originally led to believe! In the end 1st, 2nd and 3rd were awarded, with the judges between them conjuring up extra prizes after being so impressed with the talent that had come out to play that day.

3rd place and a bottle of Langton’s No.1 was given to Dan Crowther from Leeds bar Smokestack for his Skiddaw Cobbler, a refreshing and beautiful looking rhubarb and coriander invention. Liverpool bar Aloha brought it all home though with Nick Romano in 2nd for his green apple and falernum “Daffodil”, who received a complimentary meal for two at The London Carriage Works, and Kieran Clarke taking the main prize by matching Langton’s with his home-made Love Mix (oo-er) in the “Lake Ditrict No.9”.

A great day had by all and, to be honest, I’m glad I wasn’t judging as the drinks I tried were all incredible. A very special mention has to go to Alex Hannah and the guys at Luche Libre for supplying the brilliant food for the event (have you ever seen hungry bartenders lunging for a tray of taco’s? WOW) and all free of charge because the comp was in support of Hospitality Action. Thanks guys, you’re awesome!!!