Bols Around The World Grand Finale

Amsterdam is home of bikes, tuleps and people craving pickled gerkins dipped in peanut butter, however once a year it is also home to some of the best bartenders from across the world.

The Bols Around The World competition is a huge and hugely impressive global bartending event which pits the best bartenders from the world’s best bartending countries in a series of challenges culminating with a live battle on stage in front of a 1,000 strong crowd.

BarLifeUK were lucky enough to head to Amsterdam for the final day of competition after the previous few days had seen the original 21 semi-finalists whittled down a final 12. The judging panel responsible for this was as impressive as the list of finalists themselves, consisting, as it did, of:

A chat with Bols UK Ambassador John Clay and Australian Ambassador Jared Plummer gave an insight into the previous few days. A non-stop series of challenges designed to test the competitors skills, commercial and marketing insight, passion for bartending and overall ability to entertain.

If that sounds like a lot of hard work don’t worry there was also plenty of time for drinking, sightseeing and to top it all off they stayed on a luxury yacht.

The final day saw the top 12 receive a presentation from John Clay on the newest member of the Bols family, Bols Honey. It has become a tradition at the Around the World final for Bols to launch something new to the world with Bols Foam and Bols Yogurt previously getting their first airings at the comp.

Bols Honey has been created very much with bartenders in mind, as John explained, solving the problem of honey stuck in the bottom of your shaker tin. We will be bringing you more news on this new product as soon as we have a UK release date.

As the bartenders prepared for the evenings festivities we got a session in the Bols Bartending Academy where a bunch of journalists all proved why they swapped Boston’s for keyboard’s (BarLifeUK and Imbibe’s Kate Pass creating one of the worst drinks in the history of bartending).

Competing in the final of a cocktail competition is nerve racking enough, chuck in the above judging panel and that increases two fold, now do that on a stage in front of 1,000 people and we have the reason adult nappies were invented.

The crowd was made up of industry folk from around the world and lucky Amsterdam locals who got to sample the free Bols cocktails. In keeping with the Bols training philosophy there were also bars dotted around the venue where guests had the opportunity to make their own drinks.

On stage each bartender was asked to produce their own signature Bols serve and then return to knock out a round of drinks in the quickest possible time. We were given sample tasters of each of the competitor’s drinks and once they’d all been tried our partisan group knew the UK’s representative, Rusty Cerven from The Connaught Bar, had a good shot at the prize. 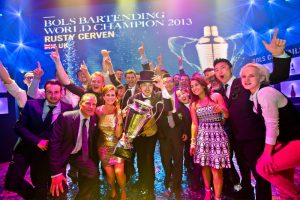 What a prize it was too with the victor taking out an 8 day trip around the world (see what they’ve done there?!) visiting any 4 cocktail cities of their choice plus a Platinum Bols Ambassadorship which includes two trips to Amsterdam for extra training.

The reveal was suitably dramatic with each finalist standing on stage with the winner being bathed in a spotlight. The light on the night fell on Rusty and the crowd went wild (well we went wild so I couldn’t hear anything else but I’m sure they did).

His drink was superb and, from what we saw, it was a very well deserved victory. The night carried on later than was sensible with plenty of ‘To Rusty’ toasts being shared.

Rusty’s winning drink is below along with the two runners up, Mateusz Szuchik from Poland and the home town favourite Ciro Adriano de Georgio.

I’m sure Bols Around The World will be back in 2014 so keep an eye out for it because it truly is an excellent competition with an amazing prize.

Pour all ingredients except for the champagne into a punch bowl, add enough ice to chill it down, top up with champagne and add garnish of grated nutmeg and lemon peel and seasonal fruit.

Ingredients all thrown before being served in a traditional Polish and Dutch porcelain serve with famous Dutch cheese and my favourite Polish biscuits. Garnished with mint leaves and thyme.

Shake all the ingredients except the Visciolata and the Absinth, dry shake and pour over fresh ice in an old fashion glass. Pour the Visciolata on top (like usually you do with Port in a New York Sour) and sprinkle the Absinth. Garnish with a grapefruit zest rolled like a small flower, served on a small tray with a lipstick, some flowers, a perfume bottle and a small mirror