Following series of heats across the UK the deserving winners jetted off to the home of Flor de Cana Nicaragua for the final and an adventure. BarLifeUK was there to bring you all the excitement.

There is a slower pace of life in Nicaragua – a languid, laid back civility, perfectly suited to beachside sunsets – and that pace soothes and embraces us immediately upon arrival, exhausted from a full day’s travel, in Managua.

One of the most strikingly beautiful, and least well known, tropical destinations I have ever visited, Nicaragua has quite a lot going for it. Active volcanoes. Lakes so vast they could swallow entire countries. Stunning beaches. Historic Spanish colonial towns. Luxurious seaside resorts (if you are into that kind of thing). 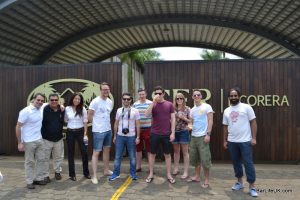 Oh, and rum. Lots and lots of rum. The original distillery was built in 1890, and the Flor de Caña brand itself was established in 1936. The same family still owns the business five generations later, and it is no surprise that they have gotten quite good at it.

I am not going to provide a minute by minute account of the trip – partly because that would get really old, really fast, and partly because I’d hate to ruin the surprises for those that are lucky enough to follow in my footsteps.

Bearing a striking similarity to a particularly boozy episode of Come Dine With Me (which is saying something), we greet each other with cautious optimism over heavily fried foods at Houston Airport, knowing that, in five short days, we will either be bestest mates or poisoning each other’s breakfast cereal.

Julian ‘The Smart One’ Kelly, an Amathus man with a vaguely Tintin-esque scampishness about him, arrives at the airport packing a plastic baggie full of Flor de Caña minis. Genius.

Like a cub scout, he is prepared for every eventuality throughout the trip. Unlike a cub scout, most of that preparation involves the procurement, transport, and ingestion of alcohol.

He is accompanied by Lee ‘The Jammy One’ Beviss, so named after 1- always ending up with a bottle of FdeC 18 at the end of the night (legend), and 2- scoring the best ‘room’ on the trip – a lush two story villa with sea views and three showers (?!) in San Juan del Sur.

Russell ‘The Drunk One’ Downie, our competitor from Edinburgh, is the mate who always makes you feel less tipsy than you are by consistently being more tipsy than you are. Way to live up to the reputation of your fine countrymen. LAD.

Birmingham’s own Aman ‘The Hairy One’ Johl, brings some midlands madness to the mix. With a full beard and a flowing mane of hair to the waist, he also takes the prize for sweatiest Englishman in Nicaragua.

Ben ‘The Hipster One’ Purslow wins the Worst Sunburn award, with an ass that looks like a snowbank half covered in tomato juice. Oh how we laughed (well, Ben mostly winced, but I am sure he was laughing on the inside).

Ben doesn’t like to be called a hipster. Do with that information what you will.

In addition to the comp winners, we also have two kick-ass bar managers along for the ride – Kate ‘Piña Colada’ Jackson from The Mayor of Scaredycat Town, and Brian ‘The Maltese Falcon’ Calleja from Threadneedles Hotel.

It quickly becomes apparent that this is a dangerous/awesome band of boozehounds. Nicaragua, prepare yourself.

There is no way to say this without sounding like a tool, so I am just going to say it. We travel in a lovely little luxury touring van, and we have an on board bartender for the duration of our trip.

And I don’t mean ‘mixologist’. I also don’t mean a guy passing around a flask. Freddy is a bartender in the truest sense – anticipating our needs before we knew we had them, dispensing water whenever it was required, and remaining utterly unflappable in the face of some seriously unsober shenanigans. He should teach a course. 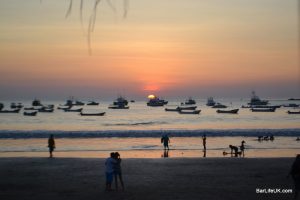 Freddy, I think I speak for the entire UK contingent when I say that you are our holiday hero.

After a very short sleep, we eat our own body weight in breakfast at the hotel and pile onto the rummy little van. Oscar, our endlessly patient driver, idles the engine as we stumble into our seats.

Freddy, as stoic and unreadable as a slightly less emotional Mr Spock, begins passing out ice cold plastic cups full of Macua, the Nicaraguan national drink, made with guava juice, orange juice, fresh lime, and a healthy free pour of rum. It is 8am. We are well on our way to insobriety.

Our first stop is a surprise for the competitors – a local fruit stall, where they are told they have ten minutes to choose ingredients for their competition cocktail.

There is quite a lot of pointing (not a lot of Spanish speakers on this trip), smelling and tasting before we continue our journey, sticky-handed and smiling, to Flor de Caña’s headquarters.

“It is like an amusement park!” global brand director (and quite possibly the happiest man alive) Mauricio says gleefully as we travel from Managua to Chichigalpa, sipping on an indeterminate number of deceptively boozy Macuas.

More of an immersive experience than a distillery – the actual molasses production and distillation happens a couple of kilometres down the road – Flor de Caña provides not only spirit education, but also insight into the development of the brand, inextricably linked as it is with the history of the country itself. 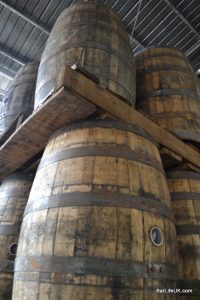 In the 1980’s, during the height of the region’s political turmoil, the Nicaraguan government seized many private enterprises. In order to save the distillery from near-certain ruin, The Pellas family sent most of their considerable rum stores to Honduras.

There it would remain for years, quietly aging in charred bourbon barrels whilst the country from whence it came suffered through extremely turbulent shifts of governmental control.

As luck would have it, the distillery was spared, though the sugar cane plantations had been ransacked. When the government stabilised, the business was able to bring the rum back to Chichigalpa, and to begin bottling rum again almost immediately.

Those years in exile had produced a beautiful aged spirit, and master distiller Pedro Uriarte decided to bottle the rum true to age, forgoing the popular solera method. To this day, Flor de Caña has the single largest store of aged rum in the world.

We are taken through a tasting of the insanely smooth Flor de Caña Centenario Gold 18yr old. The sexy amber colour is appreciated. The distinctive nutty flavours are discussed and dissected. The usual look-smell-taste chat ensues.

And then we are directed to pour a drop directly onto our palms – “here we use a fourth sense to experience the rum – touch. This is unique.” (Clearly he has never been to Trailer Happiness on a Friday night, where being ‘touched’ by rum is entirely unavoidable.)

The assistant master blender points out that there is no trace of stickiness – due to the lack of additives and the fact that the rum is distilled to 96% purity before it is diluted and aged. Also, it makes my hands smell a bit like baklava for the rest of the day, which is brilliant.

Our tour comes to an end in an entertainment area above the enormous barrel-shaped gift shop. Yes, barrel-shaped. These guys are REALLY into barrel-aging.

The finalists begin prepping their ingredients, and it soon becomes apparent that 1- everyone has already had quite a lot of rum, and 2- everyone is going to use the blender.

After a night at a fabulously wacky nightclub called Moods (not a strip club, but still named Moods), I was impressed to find that only one of our group was MIA for breakfast, and needed to be pried from his bed when it was time to set off for the day. 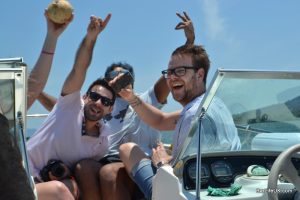 We embark at a relatively reasonable hour, obediently accept our morning cocktails from Freddy, and set out to poke around one of Nicaragua’s many active volcanoes.

Alas, the weather is not with us, blowing sulfurous smoke our way and obscuring views of the caldera. On the upside, we were all given hard hats on arrival and look like the gayest construction crew in the history of ever. We take a few hazy photos and get back on the road.

Three or four (or five) Macua cocktails later we arrive at a lush tropical marina, where a tiny speedboat with an enormous engine waits to usher us to Isla Bella, a private island owned by Sergio Pellas, brother of the owner of Flor de Caña.

As we step ashore a peacock casually waddles by, presenting his bottom to Ben rather suggestively (to be fair, Ben is asking for it). I half expect Ricardo Montalban, or at least a midget, welcoming us to a 21st century Fantasy Island.

The island is stunning and lush, and the communal spaces are clearly purpose-built for intimate family gatherings. This is an experience that can never be replicated, and surely will never be forgotten.

After another very late night at da club (thanks for the memories, I <3 Weekend!) some of our crew manage to drag their sorry asses out of bed at 7am to go fishing. I do not, because that sounds mental.

Remarkably, they manage to catch a few fish. Less remarkably, they also successfully achieve the classic English sunburn. Pink and proud, they pile off the boat, holding their impressive catches and trying not to look utterly exhausted.

Big big thanks to the Flor de Caña team who hosted us so superbly. We were led down the sugarcane path by the Global PR Director and Brand ambassador, Mauricio Solórzano, who generously shared his expertise and his fresh coconuts with us (not a euphemism).

Marc Catalan, Regional Brand Manager for Europe and our minder/guide/drinking buddy for the duration of the trip, kept us from letting our hangovers get the better of us. And the fact that he is doing it all again with another group in two weeks’ time is both inspiring and terrifying.

In short, Nicaragua is awesome. Start working on your competition drink now, get yourself into next year’s regional heats, and you might be lucky enough to meet Freddy and the peacocks in person next year.