Last Year Gosling’s Rum ran a competition with a prize of a trip to Bermuda for the winning bar team. Alec Morgan of Love Drinks joined them on their trip and has reported back to BarLifeUK what they got up to. Warning: this article contains a lot of Northerners.

National Bermuda Day has been marked on May 24th since 1909, prior to this in Britain the day was known as a celebration of the birthday of Queen Empress Victoria.

This day was originally known to those in Britain’s oldest colony as Empire Day which changed to Bermuda Day in the 1970’s. Not only is it a huge parade attended by thousands in the capital Hamilton, but also intended as a way to bring Bermudians of different races together in harmony.

To mark the occasion Love Drinks, the UK importer and distributor of Goslings Rums invited 50 bars to join the celebration by throwing their own Bermuda bash with a prize for the best party being  a trip for the winning bar team to Bermuda! As the representative for Love Drinks, I was responsible for taking the 2011 and 2012 competition winners to the land of turquoise water, swaying palms, pink sand and most importantly…Goslings Rums! 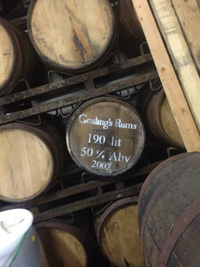 2012 competition winners were from Beautiful Drinks Manchester institution Keko Moku, consisting of Chris Mosey, Jonathan Leathley and Daniel Bigg-Wither, better known to most as Scouse, Jonboy and Biggy. The rest of the cast was made up from last year’s winners – the team from The Liars Club including chief conspirator Lyndon Higginson, Matt Robson, James J Wall and Brodie Meah.

Our journey would start outside Keko Moku in Manchester’s Northern Quarter on a bitterly cold morning at 7am for a bus transfer to London Gatwick.  As we gathered it was clear that many of the group had little or no sleep following the previous evening’s work commitments and if anyone was in any doubt what a group of the UK’s leading bartenders look like at first light on a Sunday morning need only take a look at our first picture from Day 1 (the picture was actually too horrific to print – ed).

Following the transfer and eight hour flight from London to Bermuda we were greeted by Gosling’s Brand Director Andrew Holmes. Andrew would be our host for the four day stay and was the catalyst to what was to be hugely enjoyable trip.

En route to our hotel, the Southampton Fairmont, our group were keen to find out where the hot spots were in Bermuda on a Sunday night and were more than happy to hear that The Cellar bar at The Fairmont threw the biggest party on the island on a Sunday. Loosened by a few Dark ‘N Stormy’s we joined the party and not for the last time during the trip watched as Brodie and Biggy tore up what was a rather impressive dance floor.

Day two saw our eagerly-anticipated visit to the Goslings Blending Plant for a tour and a tasting with Andrew Holmes . A fascinating tour of the blending and bottling plant was topped off with a brief introduction with master-blender Kenny, not much time for idle chit-chat as he’s a very busy man and we had a tasting to get on with at the Goslings Visitor Centre. There were a few tender individuals after the previous evening’s shenanigans at The Cellar as Andrew took us through a tasting of the Goslings rum range; Goslings Black Seal, Goslings 151, Goslings Gold, Goslings Family Reserve and a particular treat in some cask-strength pulled from the barrel as we arrived.

With our hangovers long forgotten we had a few hours to check out Hamilton including the main Goslings Store on Front St before joining Andrew at The Lobster Pot to share a meal of Bermuda’s national dish – Fish Chowder, a delicious dish of rockfish or grouper, sherry peppers and you guessed it…Goslings Rum!

Well-fed we hit some of Hamilton’s bars before a nightcap or two at our generous host’s apartment who let the boys loose on his rum and record collection.

On the third day of our trip we had a golfing challenge at the stunning Turtle Bay Par Golf Course, the talk had been talked, challenges set and it was now time to walk the walk.  Now not being one to brag all I will say that I believe it’s important to be gracious in victory although my Dark ‘N Stormy on the 19th tasted particularly sweet.

Following this we hit up the Henry VII pub in Southampton for a bite and a couple of expertly made Swizzles thanks to our bartender Shawn. The first two night’s exertions followed by golf clearly took its toll on the group as I was surprised to see every one of the party retire after dinner. 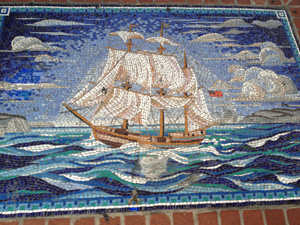 Following an early night we had a trip to the Royal Naval Dockyard  for a fascinating history lesson, built in 1814 as a strategic outpost for the British Royal Navy and played a key role in the War of 1812 and World War II. Goslings has been historically linked to the British Navy while their rum was sold exclusively out of the barrel until the First World War when the company started filling champagne bottles reclaimed from the British Officer’s Mess. The bottles were then finished with a black sealing wax, which eventually lent itself to the name of the rum itself.

A late lunch at the Dockyard’s Frog & Onion pub was  followed by a ferry ride back to Hamilton for our last night out in Bermuda. More Bermudan chowder was followed by a really fun bar crawl culminating in some rather special dancing from Brodie & Biggy.

Our last day was a free day spent by the pool with a visit to the legendary Swizzle Inn en route to the airport. The Swizzle Inn has the charming motto, ‘Swizzle Inn, Swagger Out’, not quite promoting responsible drinking however a volley of Bermudan Rum Swizzles seemed like a fitting send-off after an unforgettable trip.

A huge thanks must go to the good folks at Gosling’s for looking after us throughout our stay and a special mention to Andrew Holmes who really went above and beyond the call of duty! Look out for Andrew at this year’s Imbibe Live 2013 and this year’s Bermuda Day is not far off so listen out for how Love Drinks will be promoting the celebration this year.