A new beer has hit the bars of Brighton, Black Buffalo IPA is a new cask beer infused with the flavour of Buffalo Trace bourbon.

A couple of years ago on a trip to the Buffalo Trace distillery we visited the Lexington Brewery and were quiet taken by their Kentucky Bourbon Barrel Ale (and the lovely lady who showed us round), which is aged in ex-bourbon barrels before bottling. 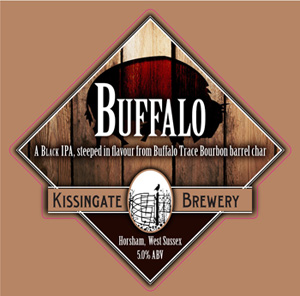 Buffalo Trace’s UK distributors Hi-Spirits have teamed up with Kissingate Brewery from Horsham to create their own ‘bourbon beer’ but have gone about it in a very different way.

Kissingate head brewer, Gary Lucas, has created a dark beer, which during the fermentation process has barrel char from the oak barrels used to age Buffalo Trace in Kentucky added.

The idea being that the hoppy, fruit and floral flavours of the IPA are combined with the vanilla, citrus and spice notes from the Buffalo barrels.

Gary had this to say about it  “With any brew, the more ingredients and flavours you work with, the greater the challenge. I wanted to reflect the distinctive flavour of the bourbon without allowing it to overpower the beer, and using the barrel char was an interesting way to achieve this. I’m delighted with the end result.”

We haven’t yet tried it over at BarLifeUK yet but beer writer Melissa Cole has who describes the combination of the beer and bourbon flavours as ‘coming together in a symphony of floral confection and spirituous song.’ Who are we to argue with spirituous song?

To start with the launch is limited to the Indigo Pub Company based in Brighton but there will be a national launch coming soon. If you want to find out more about Buffalo Black IPA and how to get your mitts on it then give Hi-Spirits a call on 01932 252100 or head to their website here.

If you want to know more about the other beers Kissingate offer then click here to be magically transported to their site.