BarLifeUK recently visited the Buffalo Trace Bourbon Empire in Brighton for a Masterclass and a few cocktails.

The Bourbon Empire Pop Up first appeared in London during Cocktail Week and was such a success it is now on the road and has spent the last 2 weeks at The Wick Inn in Brighton.

The upstairs of the pub had been transformed with a speakeasy style design complete with stuffed Buffalo head behind the bar. Local Brighton bartender Gio was on hand to knock out a selection of Buffalo Trace cocktails including Mint Juleps and Manhattans alongside a rather tasty Pickleback. 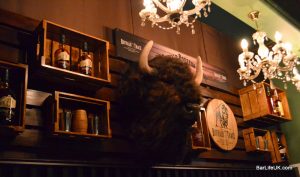 I must admit at this point that BarLifeUK are big fans of American Whiskey and of the Buffalo Trace range which also includes the likes of Blanton’s, Van Winkle, Sazerac and the Antique Collection. We are not the only ones with Whisky legend Jim Murray having given the honour of Best Whisk(e)y in the World to George T. Stagg, Sazerac 18yo Rye and Thomas H Handy, with Thomas H the current holder of the title.

With that in mind we were looking forward to trying a variety of the range in a Masterclass with Adam and Tom from, Buffalo Trace importers and distributors, Hi-Spirits.

This lineage was particularly evident in the first three samples we had which are all from the same Mash Bill (#1). Despite their different taste profiles it was interesting to see the similar base notes which came through them all.

Buffalo Trace White Dog (Mash Bill #1)
We will be bringing you more on this year’s release of the White Dog later in the week. With the popularity of this category continuing to rise due to its ability to take on flavours there is no doubt you’ll be seeing more of this product on back bars across the country in 2013.

Buffalo Trace (Mash Bill #1)
The namesake Bourbon of the distillery is the ‘base’ product of the range and tasting it after the White Dog is a great way to show people the effects of ageing in new American White Oak Barrels.

Eagle Rare (Mash Bill #1)
The first of the single barrel products of the day and aged from a minimum of 10 years, showed the complexity that can come from a longer aging process.

W.L. Weller (Wheated Bourbon Mash Bill)
The only of the wheated bourbon’s we tried, W.L. Weller is aged for a minimum of 12 years and produces a great example of this bourbon category which is not highly known about in the UK.

Thomas H. Handy (Mash Bill #2)
Aforementioned as Jim Murray’s Best Whisk(e)y in the World this was a real treat to try. Thomas H. Handy is part of the Antique Collection which Buffalo Trace releases every year. We are very lucky in the UK to be able to get hold of the range as easily as we can, there are waiting lists and no doubt fisticuffs in the US each year when they are released.

The Buffalo Trace Bourbon Empire will be travelling around the UK over the coming months, keep an eye on BarLifeUK for details of where it will be next and how you can get involved in the sessions. It is definitely worth it.