A Few Words with FEW Spirits

Early last year BarLifeUK were given a couple of bottles to try in a bar, we tried them, we liked them, we wanted to know more, we found out more.

The person to kindly give us a tasting was Michael Vachon, the booze he gave us was a range called FEW Spirits. Since that day we kept in touch, bumping into him every now and then and waiting for the chance to try the full range that FEW have to offer. 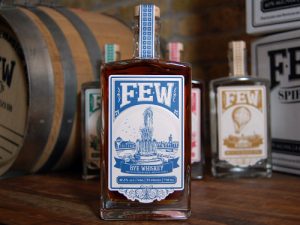 A few months later that opportunity arose when the owner of FEW, Paul Hletko, was in London and arranged a tasting. These days it seems that the story behind the brand is almost as important as the product in the bottle, FEW manages to tick both boxes.

The FEW Spirits distillery is based in Evanston, Illinois, near Chicago in the US of A (that’s part of Cook County to all those Blues Brothers fans out there) which is remarkable for one very good reason. Up until the late nineties it was illegal to drink in the town.

As a stronghold for the Temperance movement it was home to one of their leading lights, Frances Elizabeth Willard. As a result the town was dry for over 100 years and therefore a brilliantly ironic place to set up a distillery.

You won’t be surprised to hear that Paul had a bit of a fight on his hands when he first asked to build a distillery in a town long nicknamed ‘Heavenston’. It took 3 years of paperwork, legislation and battling before in April 2011 the distilleries first production run kicked in.

With such a rich backstory we thought we’d have a chat with the man himself whose family have a history in the production of boozy goodness, owning a major brewery in the Czech Republic prior to World War II.

BarLifeUK: Paul could you please talk us through the FEW range?

Paul Hletko: Of course. We currently have 5 spirits on the market, ranging from the soft and light Few American Gin and Few White Whiskey to the heavier Few Bourbon and Few Rye, and to the naval strength Few Standard Issue Gin. 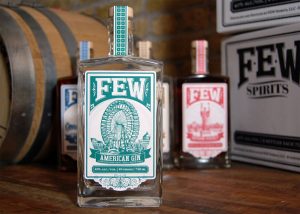 Few American Gin features a whiskey base, and is quite grain forward in a departure from more typical gins. The botanicals feature vanilla and citrus, with a backdrop of hops grown in my backyard.

Few White Whiskey is a sweet and soft grain whiskey with lots of corn and some background berry flavours.

Few Bourbon, on the other hand, is a spicy bourbon due its strong rye content and use of a yeast that has a spicy ester profile.

Few Rye Whiskey, recently named number 6 in the world, features a dose of corn to sweeten a high rye content and add a degree of complexity.  Additionally, the Few Rye uses a yeast more common in red wines, with a heavy dose of fruity esters, providing some stone fruit flavours, such as plums, pears, and grapes.

Few Standard Issue Gin is bottled at naval strength (57% ABV) and features flavours of juniper, fennel, and some woodiness from angelica.

BLUK: In 2011 when it all ran for the first time what was the first product out of the still and do you still have a bottle?

PH: The first product produced was our bourbon.  Unfortunately, my assistant dumped the bottles several weeks ago, so all of that spirit is gone.  No, I don’t know what he was thinking.

BLUK: You have 2 stills, what are their names?

PH: The larger volume still is Al, named for my grandfather.  The smaller still that we solely use for gin production is named Frances.

BLUK: The designs on the bottles are fantastic, iconic images from the 1893 World’s Fair, why did you decide on these?

PH: Our use of images from the 1893 Worlds Fair helps us convey a time and place – vital elements to any small batch product.  We are quite proud of where we are from, and use these images to convey that, rather than screaming it.  You don’t need to know anything about the brand to like the product or packaging, but the people who get it appreciate that there’s some substance to the image rather than just pretty pictures.

It’s our way of saying “Chicago” without using the word.  Additionally, Frances Willard is a giant in the prohibition movement in the US, and she was a featured speaker at the 1893 Worlds Fair, and lived in our town of Evanston, so there is an additional linkage between time and place.

For more information on getting FEW Spirits into your bar visit UK Importer Ginuine Spirits website here or drop Michael an email here.