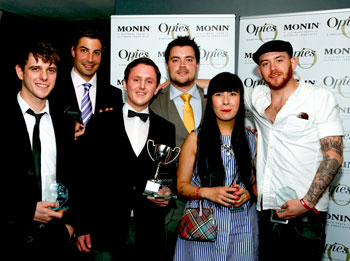 The competition tasked bartenders with the creation of a cocktail and a mocktail using Monin’s enormous range of syrups and purees, along with any other ingredients that caught their imaginations.

The final split competitors into two groups, under and over 27 years of age, with the winner of the under 27s group going on to represent the UK at the Global final in Paris. The winner of the over 27 group would also score a place on the trip.

The over 27s went first, possibly because advanced years make them sleepy in the afternoon.

BarLifeUK will admit to being a little apprehensive at this point, having in the past judged mocktails that sent us into diabetic shock. However, we needn’t have worried as the mocktails were all perfectly balanced, with one or two of them actually tasting better than the alcoholic drinks they accompanied.

As is often the case in competitions that require bartenders to make two drinks, this round was difficult to judge because some entrants absolutely nailed one drink, but fell down a little on the other.

However, Susie Wong of Manchester’s Epernay had no such problem and she was the clear winner.

Second place in the over 27 category went to Nick Fox of Neon Cactus in Leeds, with third place going to Henry Yates of World Service, Nottingham.

The youngsters took to the stage next, creating drinks to the same brief but with stranger haircuts and awful taste in music.

London Cocktail Club’s Andy Mil impressed and scared the judges in equal measure by using a pair of hair straighteners wrapped in tin foil as a loggerhead to heat one of his drinks.

Max Venning also deserves special mention for making 8 times as many drinks as anyone else (all very tasty), and naming them after a girl no-one had ever heard of.

But in yet another display of near-perfect cocktail competition performance, Bristol’s William Humphery won the under 27s heat with two fantastic drinks and a poised yet energetic performance behind the bar.

Although we would like to point out that William needs update his ‘display knowledge of the judges through banter’ routine because he’s used the same gag the last three times BarLifeUK have judged him.

Second and third places in the under 27 heat went to Andy Mil of London Cocktail Club and last year’s winner, Mate Csatlos of The Dorchester, respectively.

Shake ingredients together with cubed ice and double strain into a large coupette glass. Sprinkle Hundreds & Thousands on top as a garnish.

One for the Monin

Shake ingredients together with ice and strain into a highball glass over fresh cubed ice. Add sparkling mineral water.

Shake and strain into a sling glass with cubed ice.

Add all ingredients except the soda, shake and strain into a sundae glass. Add soda water, place sugar spun nest onto the top of the glass and add a scoop of vanilla ice cream in the nest and place red and white paper straws.