On the Bourbon and Rye calendar each year one event ringed with red pen is the launch of the Buffalo Trace Antique Collection.

The 2011 Antique Collection was received with rave reviews, BarLifeUK were lucky enough to try a few of them and can tell you they really are something special. In October the 2012 collection arrives on UK shores and the limited allocation is available on a first-come, first-served basis. 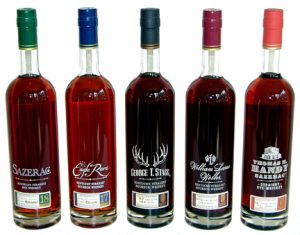 Buffalo Trace Master Distiller Harlen Wheatley had this to say about the release:
“Every year the excitement and anticipation of these whiskeys grows. We’re excited as well to finally be able to share them, and look forward to seeing what critics and consumers alike think about them.”

Below is a look at the 5 whiskeys on offer in The Buffalo Trace Antique Collection 2012 and to get your hands on them (and we suggest you don’t take too long) contact Hi-Spirits on 01932 252100, e-mail them on info@hi-spirits.com or visit www.hi-spirits.com

For more information on the Buffalo Trace brand and distillery as a whole have a look at our report on a trip we took out there last year here.

Eagle Rare 17 Year Old
The 2011 edition of this Bourbon was awarded a Gold Medal at the 2012 International Wine and Spirits Competition in the UK. The 2012 edition was distilled in the spring of 1993 and has been described as dry and delicate, with hints of leather, almonds and tobacco.

George T. Stagg
The 2011 release was named the Number One Spirit in the World by F. Paul Pacult in the 2012 Spirit Journal, as well as the Second Finest Whiskey in the World in Jim Murray’s Whisky Bible.  The 2012 George T. Stagg was distilled in the spring of 1995 and weighs in at 71.4% ABV. This whiskey tastes of rich dark chocolate, coffee and vanilla.

Thomas H. Handy Sazerac Rye
The 2011 edition of this uncut and unfiltered straight rye whiskey was named Rye Whiskey of the Year in Jim Murray’s Whisky Bible. This year’s Handy was distilled in the spring of 2006, and weighs in at 66.2% ABV. The flavour is described as cinnamon, dark fruit, allspice, lingering.

William Larue Weller
The 2011 edition of the Antique Collection’s uncut, unfiltered, wheated bourbon won a double gold medal at the San Francisco World Spirits Competition.  The 2012 offering was distilled in the spring of 2000 and registers at 65% ABV.  The taste is dark vanilla, almond and plum.