OnLocation: One Night in Bristol

One of the best things about running BarLifeUK is travelling to various parts of the UK and witnessing first hand the micro-cultures that make up the UK’s cocktail culture as a whole.

We have always tried to get out of London as much as possible, and while trade shows and cocktail competitions have regularly helped us do just that, for a while we have wanted to formalise the process.

We mentioned this to Tim Homewood, Jose Cuervo Tradicional’s brand ambassador, and he jumped at the chance to join forces with us and make it happen.

Over the coming months we will travel to cities around the UK with the sole purpose of visiting as many bars as possible, and present you with our findings in these OnLocation reports.

Bristol has a thriving and proactive community of bartenders. It is a logistical necessity that most cocktail competitions take place in London, and yet it is rare not to see a Bristolian competing in them.

They also boast their very own Cocktail Week, which takes place in September. These facts, combined with an affluent student population and a large number of well heeled locals, mean that Bristol’s cocktail bars are thriving, and it has more quality venues than you might expect for a city of its size.

We stopped for our first cocktail of the day at Milk Thistle (Quay Head House, Colston Avenue, BS1 1EB).

Walking past Milk Thistle, you might not realise there is a bar behind its sign-less, black door and intercom. However, beyond the nondescript exterior, you will find a four level cocktail bar with speakeasy leanings.

Like several of Bristol’s best bars, Milk Thistle is quite ‘grown up’, for want of a better term. The menu is classically orientated, with lots of twists and, wherever possible, makes use of local ingredients, including cider.

A huge stag’s head presides over a fireplace in the ground floor lounge, and taxidermy is something you will see time and again in Bristol’s bars, with stuffed squirrels being the motif de jour. Why? We have no idea.

Richard Tring and Matt Fairhurst were on duty during our visit, and they are most welcoming hosts. While Richard plied us with cocktails and some very tasty Anchor Steam beer, Matt sampled the bottle of Tradicional that Tim keeps about his person at all times.

This is the cocktail he created for us on the spot:

Summary: Milk Thistle offers superb, grown up drinks in surroundings somewhere between an airy gentleman’s club and a jolly Victorian officer’s mess. They are serious about their cocktail history here, and as a visiting bartender, be wary of trying to out-knowledge these guys… They know their stuff.

Tradicional Reposado is rested for up to 6 months in ex-Bourbon barrels to give the Tequila its rich caramel and vanilla notes. Tradicional is the perfect base for Tequila cocktails and is also excellent served Ice Cold as part of a deconstructed sangrita.

Our plan to have ‘just one drink’ in each bar made it as far as crossing the threshold of Milk Thistle, and we decided that some food was in order if we were to make it through the night. So, we stopped next at The Rummer Hotel.

The Rummer sits in Bristol’s old quarter, which is a very pleasant place to mooch about, and offers food and drinks all day, seven days a week.

The Rummer is very much a restaurant, with most of its floor space given over to dining and a large, very comfortable lounge area with an impressive fireplace.

Having said that, the joint’s bar stocks over 400 spirits, and they are fond of a spot of cocktail and food pairing. Our food was absolutely first rate, and it lined our stomachs admirably for the coming night of cocktails.

Summary: The Rummer is the kind of place in which locals will lose a full day, grazing away a hangover. As a touring bartender, you will likely want to visit early evening for an excellent meal and a glass of wine, before heading out into the night.

Hyde & Co. has long been one of Bristol’s cocktail mainstays. It is a pure-blood speakeasy bar, requiring guests ring a bell to be collected from the front door and seated in its dimly lit, cozy interior (if you are in a party of 6 or more, you will need to call ahead).

The drinks at Hyde & Co. are again of the grown up variety, with lots of stirring down occurring behind the bar at any given moment. BarLifeUK’s Hyde & Co. favourite is the Nosedive Cocktail, taken from the Savoy Cocktail Book.

The nosedive was apparently a 30s fighter pilot’s drink, and is the Jager Bomb’s rather more sophisticated precursor. An olive and measure of gin are placed in a shot glass, which is in turn dropped into a tumbler of ginger ale. It tastes awesome and is the perfect eye opener in the midst of a long cocktail safari.

You will often find Annie Elisabeth Mason, the brains behind Bristol Cocktail Week, tending the bar. Annie knows the bars and bartenders of Bristol like the back of her hand, and should you want any pointers on how best to spend your time there… She’s your woman.

Summary: Hyde & Co. is bartender nirvana. The drinks are strong, tasty and well made. Be careful about visiting this place too early during your night… You are very likely to get captured and not make it to another bar.

The Colour Inn (formerly Whitlock and Grace) is about as far from speakeasy territory as it is possible to get. The bar also serves as an art gallery, and is very much about having a good drinks and good times.

Disco drinks and food on a stick are the order of the day, chosen from one of the most enticing and least pretentious cocktail menus we’ve seen in a while.

After several hours of stirred cocktails and heavy beers, my frozen Daiquiri was bloody marvelous. In fact all three drinks we ordered both looked and tasted awesome.

The drinks offering, put together by Sarah Golightly and her team, does a fantastic job of making cocktails desirable without being intimidating; if you are touring Bristol with a cocktail novice, this is the place to start.

Summary: A brilliant bar, able to prove that disco drinks can taste great. If you lived in Bristol, you would spend a lot of time in The Colour Inn.

Papaji’s has re-invented itself of late, dropping the majority of its food offering in favour of becoming a proper good time bar.

You are likely to find 42Below Cocktail World Cup UK finalist, Jolene Cadwell, smashing out drinks to a young, rowdy crowd. On the Wednesday night we visited Papaji’s, it was heaving, so we took our drinks to what is probably Bristol’s best outside drinking (and smoking) space.

We were very impressed that Jamie Robinson, a newcomer to bartending, was eager to have a play with the Cuervo Tradicional. He disappeared behind the bar, returning later with this. He’d made it on the spot, and balanced it perfectly:

Summary: Papaji’s is a great party bar. If the weather is good, you’ll want to sit outside and sip cocktails. If it’s not, you may well find a ‘what happens in Bristol stays in Bristol’ playmate here.

Haus is small but perfectly formed, and brings to mind Edinburgh’s Bramble. The drinks are absolutely first rate, and many of Bristol’s finest bartenders cut their teeth here.

BarLifeUK have visited Bristol a few times over the last couple of years, and we always seems to end up in Haus. It is dark, comfortable and literally eats up time. Pop in for a quick drink and you will emerge hours later, walking unsteadily with your thirst for great drinks fully satisfied.

Should you find yourself there late at night (and you probably will), the city’s bartenders are likely to trickle in as their shifts end. It is the perfect place to hang with the industry once the cashing up is done.

Summary: Haus Bar was probably Bristol’s first proper cocktail bar, and it remains one of the best. Ask them to show you what’s behind the hidden panel on the wall above the back bar.

A trip to Bristol wouldn’t be complete without some cider, and The Apple, a barge moored on the river is probably the best place to get some.

They have a fantastic range of bottled and draft cider, and also offer a ‘build your own ploughman’s’ lunch which is perfect hangover fodder. 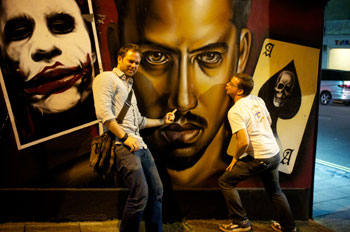 Illusions is without doubt the weirdest place BarLifeUK have ever had a drink.

It is a scruffy dive bar that offers live magic shows and terrible live music to a predominantly drunk student crowd.

This may not sound particularly tempting, but there is something to be said for the novelty value, and I suspect that if BarLifeUK were based in Bristol, we’d find ourselves in here more than we care to admit. Illusions is next door to Hyde & Co. and you will feel its scary wall mural calling to you every time you leave.

Bristol in a nutshell

Bristol is a great city. It has a surfy, studenty vibe, and is small enough that a weekend is plenty of time to get properly under its skin.

Cocktail-wise, the speakeasy rules. You’ll find no shortage of ‘bartender drinks’… Stirred, strong and bitter, and yet there are enough places bucking that trend to make for an interesting, varied night out.

Drinking cocktails clearly ranks highly in many Bristolian’s ‘things to do list’, and the scene is growing all the time, thanks in no small part to some excellent bartenders who have created a bartending community that rivals London or anywhere else you care to mention.

Also in this series: