This has been a big year for Bacardi, seeing not only the epic Legacy Cocktail Competition finals in Puerto Rico, but also their 150th birthday.

To celebrate the latter, eight of their dynasty of master blenders came together to create a rare blend, presented in a bespoke decanter.

Only 1000 have been created, with 600 going to members of the Bacardi family. The remaining 400 have been released for sale in travel retail outlets and to selected bars.

The Savoy’s American Bar, being one of Bacardi’s spiritual homes, was presented with one of the decanters last week, and a few journalists and industry figures were invited along to witness the event, and taste the rum. 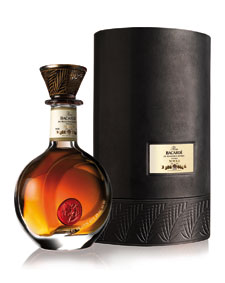 The decanter itself is beautiful. Sculpted in the image of a coconut, it pays homage to El Coco, a coconut palm planted outside the original Bacardi distillery in Cuba, the death of which was said to foretell the distillery’s closure years later when Bacardi were forced out of the country by Castro’s communistas.

The decanter ships with a transit stopper which is designed to be replaced when the bottle reaches its final home. The display stopper resembles a palm tree, and represents the second El Coco that was planted outside Bacardi’s new home in Puerto Rico.

The rum employs a blend of Bacardi rums, rested in oak barrels for up to 20 years. It is then finished in 60-year-old Cognac barrels from the Bacardi family’s private cellars, resulting in a full-bodied rum boasting a smooth, oaken character and mellow flavour.

When asked if the rum was for drinking or collecting, Enrique Comas, a 6th generation member of the Bacardi family, answered: “The ideas is that it was created by the family, for the family to enjoy. Everybody has a special moment in their life, and this is the time to drink it”.

You can see an example of the Bacardi 150th Birthday decanter at the American Bar, and if you have the best part of £300 in your pocket, you will be able to taste it too.