As momentum, pressure and partying all rose, the announcement of the 2012 G’Vine GCP champion grew ever nearer.

To say the GCP finals in Cognac were a marathon not a sprint would be doing the effort involved in competing a disservice, it is more like a 6 event heptathlon with a whole lot more Negroni’s.

After the first two days (see the write up here) the organising team at G’Vine really turned the heat up on Day 3 to a level that would see guards at Guantanamo Bay wince. Despite most competitors being reasonably sensible the night before in preparation for a big day ahead, it was still not a matter of pasta and water followed by bed at 8pm so there were a few blurry eyes on the bus at 9:30am.

The written test that awaited them at G’Vine head-quarters at Villevert was tough, really tough. Anyone of you who has met Philip Duff will know that there is an evil glint behind those shining Irish eyes and that came to the fore with this exam.

There was no resting for our intrepid final 15 however as they were soon ushered one by one into the on-site bar for the Speed & Accuracy Round. Normally these are two very distinctly different challenges (Rematch isn’t exactly known for its accuracy after all!) but with the help of the BarMetrix system these two rounds were combined and accurately measured for what I believe was the first time in competition history. 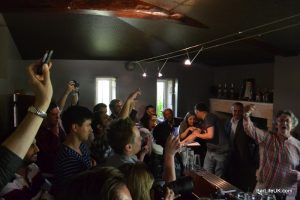 The competitors had each been given the drink specs and bar set-up schematics prior to their arrival in Cognac with the drinks in question being:
1 x G’Vine Nouaison & Fentimans Tonic
1 x G’Vine Floraison & Fever Tree Tonic
1 x Jasmine
1 x Floral Martini
1 x Negroni

These were made against the clock with deductions for various mistakes such as spillage, missing garnish, missing ingredient etc. The competitor then had to call them away with the price of each drink, give a total price and clean down the bar. To top it all off the BarMetrix system was used to measure the bottles before and after each competitor to give a 100% accurate reading of how much product was used in each drink.

This gave the competitors a tough balancing act to perfect, between accuracy and speed which was handled in a variety of different ways. It really was a tough challenge not helped by the fact that half of Cognac seemed to be packed in the tiny bar to watch them all suffer.

Not to be outdone gaz, after a quick meditation, stepped up to the plate to show the young whippersnappers  how it was done. He put in an epic round (including his famous finger stirred Negroni) and showed that no matter how many times you get up in front of your peers the pressure shakes can affect anyone!

Boating on the river

After the madness of the day the evening was designed to calm everyone down with a boat trip down the river filled with Gin & Tonics and Karaoke. The drinks were in general a step above the singing but special mentions have to go to Frankie and Amanda for their efforts and gaz for his rendition of O’Rielly’s Daughter which left the boat in hysterics. However the performance of the day had to go to the whole boat for a rousing version of Happy Birthday for Sebastian. 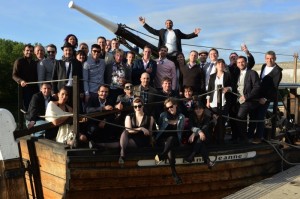 The evening was topped off with a visit to a Michelin Star restaurant overlooking the river where Philip, Shawn & gaz’s Commonwealth Gin, made the day before, was unveiled. It certainly wasn’t the worst gin I have ever tasted but don’t expect to be seeing it in your bars any day soon (if you want to try it ask me nicely as I have a bottle here).

Day 4 saw the final 15 back in the Villevert bar in the morning for the Personality Test. Each bartender had 5 minutes to act naturally in a very unnatural setting, treating Phil, Shawn and gaz as customers in their bar. They had to make drinks and have a chat to them as they would if they had just walked in off the streets.

Jokes were made, current events were discussed and numerous Negroni’s and G&T’s were handed out. It was the challenge that generally people felt most comfortable about prior to participating but proved to be a tricky beast to nail.

After an afternoon of relaxing around Cognac and picking up supplies for the next day’s big event the evening saw the infamous pool party. Now ‘What happens at a pool party stays at a pool party’ so most of the night can only be summed up in the words hilarious, wet and boozy however there is one event that cannot go unreported.

A variety of food was on offer during the evening from Oysters to Prawns and Cheese to Cured Pork Leg however one of these elements became the star of the night. There are maybe 15 people in the world who look at a cured leg of pork and immediately think Luge – in Shawn Soole and Trevor Kallies we had two of them with us. 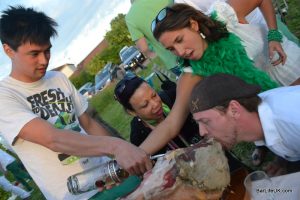 After a few minutes of explanation to a very confused looking French catering staff member the penny dropped and a luge was carved into a beautiful piece of pork. For the next 30 minutes (or 4 bottles of tequila in metric terms) competitors, judges, guests and G’Vine staff knelt before the luge, opened their mouths and enjoyed a porky tequila shot to a chant that rung in everyone’s head for days afterwards – ‘Suck that Pig, Suck that Pig’.

You won’t be surprised to hear that the next morning the air hung heavy with a toxic mix of hangovers and embarrassment however there was no time for pig related regret, it was the final day and there was prep to be done.

We piled back to Villevert for the final time and the kitchen was taken over with competitors making syrups, infusions, shrubs and garnishes while outside on a couple of tables the amount of citrus needed for 2,250 cocktails was becoming apparent. To butcher the words of Churchill – ‘Never was so much, juiced by so many, to intoxicate so few’.

However after 4.5 hours and thousands of lemons everyone was ready for the final challenge – the Summer Ball.

In two rooms, 15 tables were set up then decorated by 15 bartenders who over the past 5 days had put everything they had out there. The ingredients were set, the ice was crushed, the glasses were polished and there was nothing left but to open the doors and let in 250 of Cognacs finest to try and vote on the 15 cocktails available. 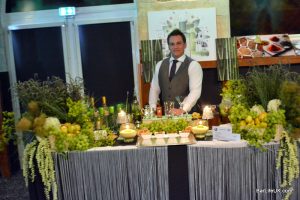 As the party started a group of 6 of us finished judging the competitors table set-ups and set about judging the cocktails on offer. Our marks were not as heavily weighted as those from the guests but when you consider that after 5 challenges totalling 500 points less than 120 separated top from bottom every single point counted that evening.

Later as I mingled with the crowd and watched the drinks being pumped out I realised I had no idea who was going to take out the title. All 15 finalists had not only been unbelievably good fun to hang out with but had all seemingly done well in several of the challenges. Sure I had my favourite few cocktails on the night but, as we all know, our pallets and those of consumers can sometimes be very different.

Luckily I didn’t have to wait long, the 4 hours service time shot by and before I knew it I was up on stage as the 15 stood in anticipation as last year’s winner Gegam Kazarian opened the envelope to announce the new holder of his crown. The competition was taken out by Shaher Misif from Cantina in San Francisco who delivered a heartfelt thank you speech which summed up the camaraderie between the group perfectly.

As the night disappeared beneath a sea of champagne, gin and emotional hugs everyone agreed it was week like no other and one that no-one should miss out on the chance of experiencing next year. 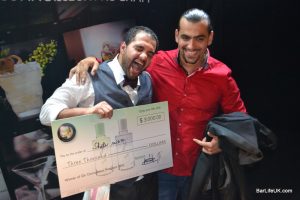 I am sure I speak for all involved when I say a massive thank you to all the G’Vine family for making us so welcome, to gaz, Shawn and Phil for keeping us entertained and in check and all the finalists for creating a magic atmosphere. To you all I simply say ‘Suck that Pig and thank you’.

The top three in each round plus the winning cocktail recipes will be posted on BarLifeUK shortly.

Pop-Quiz: Tell Us How Your July 4th Reopening Day Went

The government have streamlined the process of applying for a pavement licence in England, making it cheaper, quicker and

BarLifeUK Bartenders' Crossword Each clue contains a line from a song about drink, or drinking. The answer is the name