It’s bee-n around in the US for over a year now but Jack Daniel’s Tennessee Honey has finally buzzed over to UK shores.

Honey American Whiskey is set to be big news over the summer with several brands pollenating the UK market however if popularity in the US market is anything to go by Jack Daniel’s is set to be queen bee. 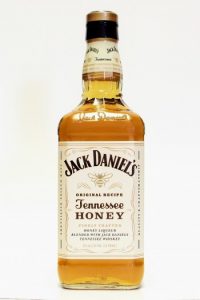 Jack Daniel’s Tennessee Honey is a mix of Jack Daniel’s Old No. 7 and an American Honey Liquor which are blended together to create a product which comes in at 35% ABV. Jack Daniel’s itself has always been a slightly sweet whiskey with maple syrup notes due to the charcoal filtering process so it is the natural brand to be combined with the honey flavours.

The liquid itself is a lot less overtly sweet than we anticipated with some fantastic spiced notes (especially cinnamon) on both the nose and pallet giving it a little sting in the tail. It also manages to avoid the pitfall of many honey based products on the market by not having any claggy mouth feel problems.

Whilst the suggested serves are as a chilled shot or mixed with Lemonade, Ginger or Coke we think it has an opportunity to be the base of some really interesting cocktails. With this in mind we took a bottle down to Callooh Callay, a hive of creativity, for the gang to play with.

Some really great drinks were created for us including one which combined the Tennessee Honey with Fernet Branca for a beautifully balanced cocktail.

Let’s face it, Jack Daniels and Honey combined is going to be a massively popular drink which is sure to see customers swarming to get their hands on a bottle. BarLifeUK also thinks that it will become popular with bartenders as an ingredient to add some honey sweetness to cocktails whilst keeping up the alcohol kick.

For more info have a chat with your friendly Bacardi Brow n Forman Brands rep or visit the Facebook page here.