The came, they drank they conquered – The Bacardi UK Tiki Team are victorious at the annual Rum Renaissance 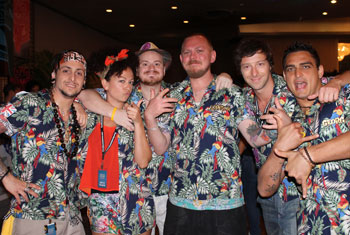 Rum Renaissance is run by the dedicated Rob Burr and, is in its fourth successful year.

It is a week of sponsored rum parties, culminating in a rum fair and the all-important Tiki Off. For Rum fans, this is as good as it gets, and for sun fans, did I mention it was hosted in Miami?

Being both a rum and sun fan, I could hardly wait!

Fanatics may seem quite a strong word but looking around on the first night  I witnessed  a sea of tiki shirts, a gallery of rum tattoos, and a couple of pirates.

Everyone here has certainly dedicated their lives to rum and some had travelled far to be here.  After I got over the initial scepticism of couples with matching tiki shirts (and the two pirates) I realised this was a pretty cool crowd who loved rum as much as I do. It was going to be a very special week!

The week began with a delicious BBQ and rum cocktails, hosted by Ron Zacapa. The next day was a visit to the Mai Kai, a world famous tiki mecca. A playground of totem poles, water falls, and coconuts, it was like something from the India Jones ride at Disney land. Not that I have been there- Alexx’s words.

Next evening we had the pleasure of a roof top party at the fancy Soho Beach house, hosted by Brugal, where it was the girls in Brugal Bikinis that made an impression. Then it was on to the Bacardi Penthouse, to celebrate Bacardi’s 150th birthday. Here we were treated to some barrel aged El Presidentes, carbonated Bacardi cocktails and Mary Pickfords. Needless to say I was a big fan!

Day three was Diplotamicos turn to impress, with a pool side party in glamorous south beach. I have to say standing by the pool sipping on rum and watching the sun set was pretty special.

By Saturday we had all consumed a fair amount of rum, and now it was time for the all-important Rum Fair and the Tiki off!

The ‘Tiki off’ was a battle of egos between the UK’s finest Tiki bartender’s versus the US. Let’s be honest, this has always been a bit of an easy win for the UK, with half the US team being assembled on the day. But this year was to be different. The US team had matching Tiki shirts and fighting talk!

This year’s UK team consisted of the mild mannered Lyndon, Liars Club, the shy and retiring Alexx, Trailer, the gentlemanly Bart, Hula, the modest Georgie, Mahiki and the sensible Danny, from Aloha. I was the token lady from Bacardi there to sponsor, support, and wear a tiki shirt that Lyndon gave me!

Now I’m not sure if it was the fact that the UK team were half the size and half the age of most of the spectators at RR, but they were treated like rock stars, much to my dismay. But who am I to judge, they played their part and the yanks loved it.

Bacardi Rum has sponsored the UK team for four years running, and each year the boys have put on a show. This year was to be no different. Round one of the competition was ‘knowledge’ where the US took the lead. This made the UK team a little nervous. But not for long as they smashed every other round with a very strong and slightly embarrassing, lead before the final presentation.

The UK team put on an impressive final performance with a tiki themed Olympics! They created an impressive punch mixing Bacardi Superior, Gold, Black and Solera, in true tiki style. This won the gold and made the boys winners for the fourth year running.

The boys certainly did us proud and showed what we have to offer this side of the pond. I hear that the US team are already devising a plan for next year. I guess they need the practice.

Shervene Shahbazkhani cut her teeth at the reputed Voodoo Rooms. After three months behind the bar, Shev won her first cocktail competition which led to a string of victories including, 42Below World Cup, World Class, Jack Daniel's, Appleton Estate Bartender Challenge, and then some. In 2010 she joined the Bacardi family as the UK Brand Ambassador for Bacardi Rum, for whom she travels the country drinking Daiquiris and talking rum.