Vodka One’s innovative draught system delivers one serve of vodka in one second at one degree centigrade.

Launched by Hi-Spirits and the brain child of Chairman Jeremy Hill, Vodka One has been successfully trialed in several high street venues to great success. Amongst the other benefits highlighted above it also produces zero wastage and houses built-in stock control software. 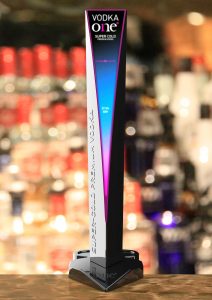 The new Vodka One system also puts spirits right in front of the customer the moment they walk to the bar with the delivery system sitting on the bar top in an area long the sole domain of beer and cider (let’s face it their bottles have been encroaching on the spirit ruled back bar for many years).

On top of that it frees up a huge amount of back bar space that high volume high street venues have had to give to their house pour vodka to keep up with demand. With the Vodka One system all of that back bar space can now be given over to different spirits, to help encourage people to try something new.

Company chairman Jeremy Hill said: “We believe Vodka One is a wonderful piece of brand development and technology rolled into one. Vodka One is crafted and five-times distilled in the United States and is delivered at a perfectly chilled one degree centigrade within one second. The benefits are numerous and include: zero product waste, fast serve speed, reduced packaging and in-built stock control software. Vodka One has been trialed at a well-known high street operator and it’s been shown to dramatically reduce serve time to the customer, not least because it’s a single-handed operation, allowing mixers to be added at the same time.  A lot of time, and often product, is wasted at the moment as staff switch over bottles of vodka on optics.”