There’s a fine line between confidence and arrogance. 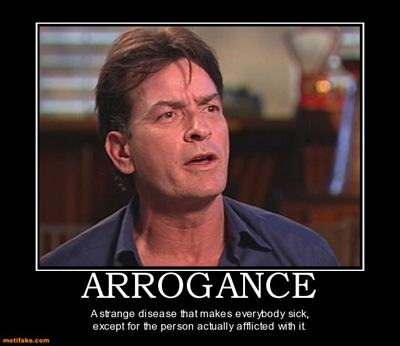 And I’m sure that at some point in our careers we’ve all ventured across that border and in to the dark side, more than likely unaware that we’ve done so.

Some people spend a little too much time there, I’m sure we’ve all met somebody who we walk away from with a lack of respect, after a conversation with them, or after a drink they’ve served us or even after a presentation during a cocktail competition.

Are they aware that we feel like this? Is arrogance all down to perception?

1. full trust; belief in the powers, trustworthiness, or reliability of a person or thing: We have every
confidence in their ability to succeed.
2. belief in oneself and one’s powers or abilities; self-confidence; self-reliance; assurance.
3. certitude; assurance: He described the situation with such confidence that the audience believed him completely.

This all stems from a recent trip through America, where on that journey I encountered many an American. Do you think Americans are cock sure, big headed and arrogant?

I’ve had experiences with all of the above; Know it all frat boys, 6ft tall 5ft wide Cowboys barging past you, overly hip bartenders in Brooklyn passing judgement…But what makes Americans so sure of themselves? They proclaim that they are the greatest nation, that they are better at most things, so they’re arrogant right?

Let’s look at upbringing. From birth they are fed positivity by their parents, their teachers and all the media that surrounds them. They’re told that they can be the best, their Moms take them to all sorts of sporting events to participate in, and Dad sure is proud when slugger makes the team.

They may not be the best, but they’re made to believe they could be and that anything is possible.

Now look at a typical UK upbringing, where what we do from school and all throughout our adulthood is mock and belittle each other. It’s banter right? We put each other down and insult our mates as much as possible and this makes us thick skinned and funny, those damn yankees don’t get our sense of humour…

But you go to a coffee shop, or a clothes shop in America where a typical adolescent teen will serve you. What’s the first thing they do? They come bounding over to you, big smile, plenty of eye contact and say “Hello, how are you? How can I help you?”.

Full of confidence and customer service skills. Now let’s flip back to the UK, when you go in to an establishment or shop, does the teen greet you in the same way? Or does there seem to be a huge social barrier, a lack of social skills blocking them from even saying hello or making eye contact at the very least?! From what I see on the large scale, it seems so.

Up until the age of 21/22 I was cripplingly shy. I didn’t have many friends, I was scared to answer phones and could barely hold down conversations with people comfortably.

For those who know me now, they may find this hard to believe. Skip forward 6 years or so and I’ll chat to anyone and enjoy it!

And where did this new found confidence come from? Working in a bar of course. The bar industry is the most anti-social (long hours, no weekends, lack of seeing “normal friends”), yet most socially enveloping job in the world (not a real fact).

We are put on a platform for the world to see and we perform for them. When training newbie bartenders, I always tell them to think of the bar as their stage, where they are in charge and regardless of who is on the other side and how much they may shout or scream, they can’t have anything until you give it to them.

You have the power (a little bit of Castle Grayskull) and therefore have nothing to fear. This fills them with confidence, that may be short lived but it’s a starting block.

Is arrogance acceptable? Well Muhammed Ali may be living proof that you can get away with being cocky and arrogant. He told the world he was the greatest boxer ever, and to this day many would still agree.

But why do we allow Ali to get away with it? Well he’s charismatic, endearing and witty about his over indulgent confidence. Also, he was right.. He won the world title no less than 3 times. Many studies in to arrogance have taken place and there seems to be evidence that arrogance is linked to creativity.

We’re all creative types right? Coming up with new cocktails or new ventures. What I believe the majority of our industry have, certainly in the UK, is humility, and this is what holds the line between the good and the bad. And maybe that stems from our upbringings once again, we know how to take it on the chin and we know how to be modest.

In my opinion the difference between the two is this:

Layman’s terms I know, but the clear difference is understandable.

But the epitome of arrogance is posting on Facebook about every free trip to the sun or glamorous tasting event each brand takes ANDY IVES!!! Nobody likes THAT guy…

Jamie foolishly left the wording of his bio up to us. We would then take this opportunity to point out that while he is an excellent bartender, peerless host and notable bar operator, he has developed a worrying tendency to post pictures of small dogs on Facebook. Approach with caution.