The Monkey Shoulder tour 2011 was devised by Dean & the team to show the a bit more love to the UK & show off the more fun side of Monkey Shoulder. With the word of Monkey Shoulder continuing to spread globally with its recent launch in Australia & increasing focus in the US, it was apparent the UK needed a bit of the fun. 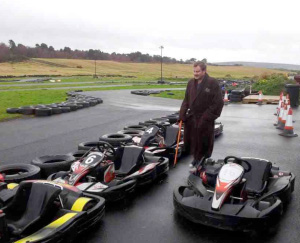 So a group of us from around the country were called to the village of Dufftown, Speyside to experience a few days in the life of Monkey’s (well whisky induced ones).

It all began on another cold winter’s morning, well let’s face it it’s been winter for months! Unsurprisingly we all made it to Paddington in time for an early train, I always find it funny how we are always on time for such trips but can’t always make it back into work from a half hour lunch break?

It was all rather secretive with nothing but a flight number and a Guinness orany idea where we were even staying. We landed & were met buy some “ministers” complete with bath robes & whisky laden walking canes; Stuart (minister for ministering crappy RTD’s on the weak), Jeevan (minister for transport, who had no driving licence), Zdenek (minister for responsible drinking) & Mr. Dean Callan… as you can see, we were in safe hands?!

We were quickly whisked off to lunch at a rather Scottish (in other words soaking bloody wet) go kart track, split into teams & let loose… Much to our amusement but the sheer despair of the track supervisor we discovered that some of us couldn’t drive go karts in the wet!

Hats off to Dean for completely beaching his kart on the grass in the grand final, the Czech’s driving like absolute animals & the quote of the day going to the track supervisor “That was be far thee worst I’ve ever seen oot there!!”

We set off to our accommodation, which I was pleased to find out were some of the original cottages within the Glenfiddich & Balvenie grounds all kitted out with the obligatory bottle & Monkey bath robes, I suddenly felt like I had found an item of clothing I could live in forever! 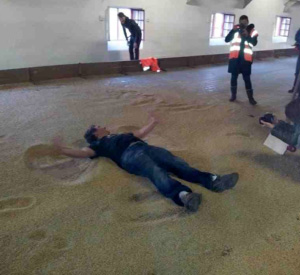 The next step was obvious; an evening meal in the Balvenie farmhouse, a cheeky Tesco’s larger? & a trip to the local boozers, & local they were! Some time later….. 3 pubs down, a few confused regulars and 100 & something measures of Monkey Shoulder polished, things were starting to make a little less sense!

So we all woke up at 7am sharp, fresh faced & ready for the day (believe what you will). But after a hearty breakfast & a chance to try some fabulous Whiskies, we were indeed all fine. On with the tour & even though the classic industry trip can occasionally drag on like a pair of elephants tits (mission complete Mr. Ives) this one was very different.

Perhaps it was the fact we were able to climb into 1 of 4 remaining working malt kilns or enjoy a classic Monkey Diablo cocktail prepared by Mr.Callen in the Balvennie kiln room but it has to be said that diving head first into a 2 ½ tonne pile of malt is a lot of fun, as is making barley angels.

We clearly needed a pit stop after this tough day of research so we headed back to rest up at the cottages (well it was 4pm & getting dark?!) Next stop, we were told to congregate near Glenfiddich Warehouse No. 8 where we were taken inside to be greeted by Brian Kinsman, Malt Master. At this point we were still unsure of the general plan but as Brian explained a bit more about the whiskies they produce all of our eyes fell toward an un-marked cask that was clearly out of place in front of us. 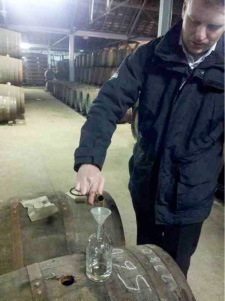 You may have guessed it was indeed Monkey Shoulder, but a cask strength barrel, ready for us to bottle for ourselves using “the dog” (a make shift tool crafted by old warehouse employees to steal a few drams! Hence; “taking the dog for a walk”) I’m sure you can imagine it tasted pretty damn good too.

Off for a dinner & drinks, in robes of course to “The Highlander” and what has to be one of the more impressive whisky collections I’ve seen in a while, including some very rare batches & a Glenfiddich bottling for Playboy magazine from the 70’s.

On arrival there was a short power outage in the town due to the weather, which a few of us suspected was perhaps the minister for transport crashing into an electricity pylon? The mass of candles that engulfed the bar added to the atmosphere perfect for some serious whisky tasting.  After dinner cocktails & a mountain of cheese awaited us at Charles Gordon’s summer house next to the Balvenie castle, this included a sterling effort by Stuart making a huge blazer in 20mph winds without going up like a cheap do-it-yourself vodka distillery!?

A tired breakfast later we departed back to our respective towns, most likely looking exactly what you may expect from such an educational tour. A big effort was put in by Dean, the Monkey Shoulder team, the ministers and us I might add, well as we all know; its hard work having fun. So, as a wise man (debatable) once said, “brand trips are nearly always great, but this one stood out for being bloody good fun”.

Joe has worked in the bar industry for over 9 years now, predominately within cocktail bars. He has been everything from a bar back to general manager along the way, also writing & developing cocktail menus as well as training staff. He setup BarUnLtd in early 2011 which included training & development for spirit brands & also helping run bars at high profile events across the u.k. Joe is now full time with First Drinks Brands.