Without stating the obvious, this was never going to be an ordinary Christmas dinner.

Although we did foolishly think that in the beginning, little did we know how things were about to unfold….

One cold hung-over morning (more likely afternoon?) in October, after the Opal Halloween Ball as I remember, I was kindly invited to take part in an ongoing industry style “come dine with me” that a few regular faces had been doing for a while now:

Apparently it was Sara and Jimi’s turn to host which I thought was convenient as I live just round the corner. We did the obvious thing and joined forces to co-host and after setting a date to start the planning we met in the only place we thought appropriate, our local pub.

Now, I believe it was at this exact point (or a few pints later) that night was transformed from a lovely traditional Christmas dinner to a spectacularly unusual mix of mad food, obligatory flaming drinks and customized party games with just a hint of “what the hell is going on now?”. If any of you know us then I think you may already know where this is all heading….

I won’t go into full menu details now as that would probably spoil the article! But this is what our guests knew at the time.

Preparation continued, and for the second and final planning session we decided the park cafe was the more productive option, simply going on the fact that last time we ended up seriously considering carving the turkey with a Samurai sword whilst wearing a hockey mask, turning a variation of a classic pork side into “chicken in sleeping bags” and making a crème caramel the size of a garden bin and flambéing it?!

The day of the meal

I had made an informed executive decision to go out to a rather large Christmas party the night before so wasn’t looking my best (said the expression on Jimi’s face), however 10am or not, there was cooking to be done and after acquiring the help of a number of my housemates the total to cook for had risen to 14.

Now I enjoy a challenge as much as anybody else but had this gone too far? I didn’t think so, but it was certainly a sink or swim moment, just one of those very, very long moments… It was damn lucky we had already constructed and decorated the 16ft dinner table in our hall the day before.

General catering, arts and crafts and what could have been mistakenly identified as a mad panic continued throughout the day. However amongst the sporadic shopping trips (mainly to find out how much stuff you really can fit into a Mazda MX-5) and overcooking the first batch of cauliflower into a fine paste, we were getting somewhere.

Early doors came far too quickly and our first guests started to arrive at the designated invite co-ordinates, I raced to “The Beast” (my 1988 Piaggio APE pick up) and put my foot down, I would pay money again and again to see the faces of everyone I chauffeured that evening, despite not even hitting the full 28mph top speed.

Upon arrival everyone was met with a group of estranged staff (part time staff at best)/housemates, waiters: Nick Newman, Jen Hill, Kirstin McLenaghan and bartender Mark Routledge (fastest bartender in the west). Drinks were instantly in full flow and while everyone was catching up in the kitchen…  The Admiral (Joe Petch), A Tiger (Jimi Pearce) and Yorkshire Pudding Chef Extraordinaire (Sara Nixon) were running around as if they wouldn’t of been out of place on a rammed Friday night TGI’s dispense bar!

The starters were served worryingly efficiently and to complement the food we served 70cl bottles of classic Bucks Fizz with large straws. We had to include several intermittent drinks, perhaps to act as some sort of palate cleanser? But mainly for fun, and the next one tore off your palate and left it crying in the corner…. We introduced the “Big Bad Blazer”: 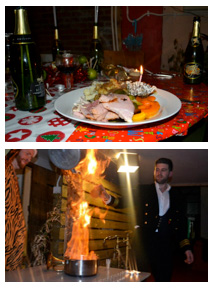 The meat was ready! The turbo ham joint, as some tradition somewhere must state, was paraded around the dinner table with fireworks strapped to it (hence the turbo).

Meanwhile, due to no fault or miscalculation of our own what so ever, the vegetables for the main were taking a little longer than to be expected, however whilst our resident foodie Tom Jubert was carving away we thought quick on our feet and started administering seemingly endless Port laybacks to pass the time.

The port bottle eventually ran dry, but just in time as dinner was ready to be served in true soup kitchen queuing style, with accompanying individual stuffing cakes and rather potent port gravy of course.

We do however need to apologise to Triffo and Anna as his vegetarian option of “Christmas Suckling fish” was served under the assumption they ate fish?! DOH!

To follow was the “Super Charged Sorbet”; a potent Hendricks, apple, lemon and passion fruit cocktail served over a large spoon of lemon sorbet with the obligatory tea set of course.

Desert was easier (partly down to Stef bringing an amazing Pavlova, thanks again), we scaled down the bin sized crème caramel idea and made a more manageable sized “Mulled Cider Sailor Jelly”, set on fire of course and served with sugar and berries.

Taking a break to look around our kitchen and dining area I realized we had not only created an indescribable mess but a lot of satisfied faces, blame the booze, the company or the food, we may never know, but I suppose none of these are a bad thing.
With great pleasure we introduced the beginning of the evenings after diner entertainment.

To begin, “musical cider bobbing”, a mangled version of musical chairs and apple bobbing, although we used cider and rum to bob a variety of fresh fruit and vegetables (including the infamous impossible coconut!).

I am sad to say at this point that there was a spot of cheating involved. For future reference; Laurence, you can’t carry a chair around with you while the music is on and Sara, using goggles and a snorkel is clearly an unfair advantage!

We had recently picked up a baby grand piano for the house and wanted to host some after dinner piano carols; however tragedy stuck when we realized we didn’t have enough people in the house to standup the half tonne monster onto its legs….. To this day it’s still saton its side… Not to worry as the finale was yet to come!

The Traditional Christmas Fish Piñata looked glorious in advance of its pummelling and in this slightly altered version, the person behind you covers your eyes whilst attacking the fish with an old rolling pin. This was all good and well until the rolling pin broke and hit the Tiger in the chest! Come on, man up Jimi; it’s just a flesh wound! Plus the fish came off a hell of a lot worse.

With our bellies full, cider in our eyes, the fish destroyed and not a shred of common sense left amongst the lot of us we decided it was clearly time for music and dancing long into the night.

Thanks to all who helped out and came along! Keep your eyes peeled over Easter: as I just had an idea…

A couple of comments 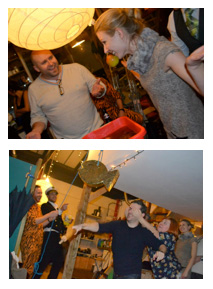 Just wanted to say a MASSIVE thank you for Saturday night – it was fantastic and the food and drinks were amazing! You really blew us all away with the amount of preparation and thought that had gone into it and showed us a bloody good time!

From being picked up in an Italian tuk tuk, to pyrotechnics, being facially immersed in cider and beating a fish with a rolling pin it was the most spectacular Christmas dinner EVER – Stefanie Holt

Racing through the dimly-lit, rain-covered streets of North London whilst balancing precariously in the boot of a three-wheeled Piaggio (like a Tuk-Tuk but less comfortable and safe)  I was fully exposed to the acrimony of a particular nasty English deluge.

Fearing for my safety at each twist and sharp turn over the traffic-congested roads I knew this was to be the start of a most unorthodox Christmas dinner. You see, my coach’s chauffeur, was also my host…  Any chill I incurred from my journey soon vanished as an enormous room-warming* 151 blue blazer (which burnt from start to finish) was prepared en masse for a collection of invited guests (of mostly familiar faces) from around the drinks industry.

The bottles of ready-made Buck’s fizz, goldfish pinata, quirky playlist and huge portions of handsomely prepared Christmas dinner set this gathering apart – with a unique feel that seemed more fun than forced.   My only regret was not being able to stay longer. After losing out (at being the first loser – well played Simon) of, “musical chairs/cider-fruit-bob” the cacophony that was, “Joe and Jimi’s Joint Xmas Jam” drew its doors closed.

I have the feeling I departed before the evening took a turn in the direction of complete inebriation (I’ve now had reports back via next-day text messages to confirm those suspicions). Here’s hoping this was only the first in a long procession of disjointed and boisterous Christmas celebration.

Thanks again everyone involved!   *The blazer literally raised the temperature of Joe’s converted warehouse/kitchen as it was being decanted from kettle to soup pot – James Triffo

Joe has worked in the bar industry for over 9 years now, predominately within cocktail bars. He has been everything from a bar back to general manager along the way, also writing & developing cocktail menus as well as training staff. He setup BarUnLtd in early 2011 which included training & development for spirit brands & also helping run bars at high profile events across the u.k. Joe is now full time with First Drinks Brands.