Bar Convent Berlin (BCB) kicks off in 2 hours but before all the talks, tastings and general bettering of ourselves begins Berlin has given us two nights of great entertainment. 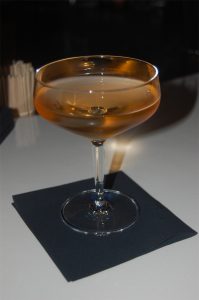 As I sit here in the bar of our hotel, the fantastic Michelberger, the fuzzy memories of sitting in this very bar last night are coming back to me. Why they are fuzzy I have no idea, I left so recently the chair was still warm when I sat down.

Whilst most of the international contingent arrived yesterday I was lucky enough to be around since Saturday which gave me an extra night to explore a couple of bars. After a quick ‘meeting’ with Steffen and Helmut from BCB washed down with a Tannen Zapfle beer a taxi took me to Hefner on the other side of town.

It was only a brief drink in Hefner before I gorged myself on Pork Knuckle and Sauerkraut at dinner but it was a great introduction to what Berlin has to offer. Sitting at the bar we enjoyed a Chocolate Orange Smash and a Horse’s Neck with the sort of bourbon measures not normally found outside of Las Vegas. The bartender, Nico Krzanr, was working hard to produce some great looking drinks in antique glassware and a quick look round the bar showed that everyone in there was drinking cocktails and looking like they were settling in for the long haul – a good sign indeed.

After eating enough dead animal to make a lion sleep for a week and me realise why the stereotypical image of a German man is fat and happy we headed onto Reingold. For the first year Berlin is holding its very own Rum Festival on the weekend before BCB and there was a party that evening at Reingold to celebrate, hosted by Abuelo Rum from Panama.

Reingold is a long thin venue with a bar running three quarters of its length. Being that it was a Saturday and a rum party it was no surprise that it was rammed. Despite this the lovely hosts from Abuelo quickly furnished us with a couple of daiquiris before leading us over to the ‘machine’ in the corner. From a secret stash he produced a piece of sugar cane and with the sort of gleeful joy that is usually reserved for children finding a Christmas Day present contained a PS3 AND a BMX, juiced away until he was red faced and the half full glass was ready to receive a healthy pour of rum.

One think to bear in mind with Berlin is that a lot of the bars are still very much smoking venues and it reminds me of the good and bad points of the anti-smoking ban. For a start if you are in a foreign city it makes it a lot harder to find the bars as you walk down the street – where is the gaggle of 5 shivering smokers puffing away when you need them to mark the entrance?

It is great to see people relaxed and enjoying their right to smoke without having to leave their friends on their own (there must be a lot less Facebook updates from people in bars in Germany). On the flip side in a packed bar without great air con it got a bit too much – perhaps I’ve just gone soft over the last few years.

I left Reingold with the glow of a man who has enjoyed some good drinks and with the knowledge that I was going to really enjoy the next few days in Berlin and Sunday night certainly didn’t disappoint.

The Michelberger Hotel is not only my home for the duration of the show but also the home of most of the international speakers, and what a hotel it is. I could bang on about the unique, minimalist rooms in this boutique hotel but all I need to tell you is that on channel one in each hotel room is The Big Lebowski on continuous loop! If you ever needed an excuse to leave a room and get a drink inside you then watching The Dude necking a White Russian will do the job.

With a Dude like spring in my step I headed down to the foyer on Sunday to make my way to the first opening party at Booze Bar. A gang had already formed ready to walk over and if any reminder was needed that this wasn’t a normal Sunday night then having Jared Brown leading the troops on a merry wander was certainly it – he just needed an umbrella to hold up to complete to look.

The party at Booze Bar was celebrating Poland as the first guest country at BCB, with vodka aplenty and some great little plates of food floating round I quickly got into the spirit. A scan around the room told you that it was show time with Jared and Anastasia in one corner, gaz Regan holding court in another, Ian Burrell refusing to drink vodka by the bar and Philip Duff’s laugh floating across the crowd. 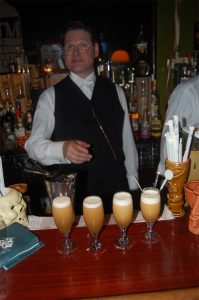 Cocktails and beer were flowing freely, I sipped on a Clubland Dog (a mix of White Dog, Dry White Port and Angostura Bitters) whilst Dean Callan rediscovered the Lemon Drop wondering aloud why on earth it had been so long since he had last had one.

Ordering Burrell a beer wasn’t as easy as it sounded when he requested a shot of Grenadine in the top of the bottle claiming it as a Tiki Beer (I should have put a shot of vodka in as well just to watch him drink it) luckily the bartenders English made this an easier task.

One launch party down two to go, so with Messer’s Duff and Burrell in tow along with the award winning Stefanie Holt we jumped a cab to Rum Trader. On route Phillip extolled the joys of this tiny bar, claiming it to be his favourite in the world – quite some recognition for a man who travels as widely as he.

It didn’t take long to see why. The bar would be busy with 10 people in it, luckily they had foreseen the extra numbers coming and erected a tent on the street to deal with the over flow.

The number of rums on the back bar from all over the world was quiet something and Stef quickly bought a round of El Dorado 15 year old to toast the sad news of the passing of El Dorado Master Blender George Robinson earlier that day.

I never met George however I am sure he would have approved of Rum Trader as a venue to remember him in along with the company – a room full of rum and drinks aficionados. Next up came a Daiquiri followed by a Rum Sour all expertly made by the team of dapperly dressed bartenders who must have more combined experience behind the stick than the team from pretty much any bar around.

If there was any doubt left that this was a holy place for rum the presence of a priest sat at the end of the bar (apparently a regular) confirmed it. As the drinks flowed we were joined by Richard Searle and Robert Burr however there was no time to settle in to comfortably – there was still a third opening party to get to at Amano Bar.

The Travelling Mixologists were hosting the party at Amano and I have to admit at this point that we were running a little late. We didn’t arrive until gone midnight, the white coats had disappeared from behind the bar and I feel we missed the big show. After the intimacy of Rum Trader I wasn’t prepared for the scale and the energy of Amano to be honest I was a bit overwhelmed and decided that a return visit was probably the best way to enjoy the venue so we bailed.

After a failed attempt to get into a couple more bars in the area it was back to the hotel to prop up the bar and enjoy a few more drinks (plus a kebab the bartender was kind enough to let us devour at his bar) before crashing out to recharge for what is bound to be a hectic couple of days.

It’s been 36 hours in Berlin and I feel I have only scratched the surface but what a surface! I hope Berlin doesn’t mind if I scratch some more over the next 48 hours and look forward to bringing you all of the news from the show itself. Right time to get out of here and blind taste 18 rums with Ian Burrell – this is what Mondays were made for!!