Who will have the Last Word?

We all know many the classics, but what about the ones lost in time? 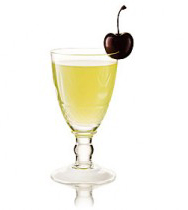 When a cocktail is lost for so long  and is found again, it has this mystery about it. Were we meant to find it or should we have left it lost in time? It reminds me of Indiana Jones seeking the lost Ark of the Covenant. If he finds it, it can change the world as we know it.

The Last Word is a drink that was mentioned in 1951 In “Bottom’s Up”, Ted Saucier has this to say about the drink:

“This cocktail was introduced around here about thirty years ago by Frank Fogarty, who was very well known in vaudeville. He was called the ‘Dublin Minstrel,’ and was a very fine monologue artist.”

That’s it. Not the biggest description of a drink that has been made the world over. The book places this drink as a prohibition era drink. The significance of this is huge.

When looking at other cocktails to come out of that period the Last Word really does stand out. Equal measures of Green Chartreuse, lime, maraschino and gin this recipe breaks all the laws of making cocktails. This drink takes on so many personalities, each taste challenging you and leaving you breathless.

“One of the best drinks I have had.”

Audrey Saunders of the Pegu Club in New York City, one of the world’s top cocktail lounges, declared The Last Word “one of the best drinks I have had.”

After being found again in Seattle by Murray Stenson a few years ago, this drink has catapulted itself amongst some of the best bartenders the world has seen. Its complexity and arrogance of flavour make it a must have on any menu.

The Last Word remains unknown to mainstream; it appears on few drink menus. But like an Old Fashioned or Aviation, it’s become a drink that world mixologists well versed in classic cocktails know how to make.

The Last Word has spawned variations, the most famous being The Final Ward, from acclaimed bartender Phil Ward of New York City, who substitutes gin and lime with rye whiskey and lemon.

We at chartreuse want to find “who will have the Last Word!” We have challenged bartenders to create their own variation of this timeless yet forgotten classic. Again using complex and strong flavours maybe they can make a drink that is one day found again and celebrated.

The Last Word cocktail has enough mystery behind it, that it has become one of the most talked about lost and found classics. We hope to unearth the next variation of this masterpiece and that is my final and “last word” on the matter!