Drink to Your Health – The History of Alcohol as a Medicine

In the beginning, there was booze.

From the moment the first alcoholic beverages were discovered, man has used it as a medicine. Apart from the stress relieving, relaxing nature that alcohol has on the body and mind, alcohol is an antiseptic and in higher doses has anesthetizing effects.

But it is a combination of alcohol and natural botanicals, which creates a far more effective medicine and has been used as such for thousands of years. It is the origin of the most famous toast, “Let’s drink to health”.

Since pre-historic times life’s drug-store has been supplied by nature. Animals naturally gravitate towards bitter plants when they are ill; the tannins and alkaloids contained have antiviral, antibacterial or antifungal properties, which give them relief.

The same principal applies to man and the practice of using plants as medicine is officially known as Phototherapy, Botanical Medicine or Herbalism and has been practiced by early civilizations in Egypt, Mesopotamia and China. A Neanderthal burial site from 60,000 years ago in northern Iraq has unearthed a man buried with 8 different types of pollen (7 of which are still used today as herbal remedies).

Ask any Druid or Witch Doctor (and if you can’t find one of those, an alternative therapist will do) what the best way is of dissolving the medicinal properties of botanicals is and the answer is to steep them in alcohol.

One of the most famous practitioners of alcohol-based herbal remedies was the father of modern medicine, Hippocrates, who’s own special recipe for intestinal worms was known as Hippocraticum Vinum.

Hippocrates was making a crude form of vermouth in approx. 400BC using local herbs in wine, but herbal infusions took on a whole new level of potency once distillation was discovered.

The higher proof spirit worked in more ways than one, acting as a solvent and allowing alkaloids, glycosides, resins and volatile oils to be extracted, but also working as a preservative for the more fragile and fresher ingredients by inhibiting fermentation.

The higher proof alcohol also had a better absorption-rate, which had a more immediate effect on the patient. Tinctures were born: Botanical extracts infused into high-proof spirit, which marked the way for the future of medicine.

The spread of Christianity with the crusades from 1095 onwards brought knowledge about the dark art of alchemy and distillation from the early Arab scholars.

The ‘Water of Life’ was being refined all over Europe (known as such due to it being safer to drink than disease-ridden water) and soon commercial apothecaries grew from the spread of the knowledge of distillation and botanical extraction selling both raw ingredients and herbal tinctures.

European colonisation during the 1400’s and 1500’s gave the apothecaries an abundance of exotic herbs, spices, barks, peels and berries to add to their medicine cabinets and from this point until relatively recently, a large percentage of medicines were made with an alcoholic base.

Gin is a good example of a spirit which was originally designed to be used as a medicine, the use of Juniper as a diuretic was believed to be able to cleanse the fevers and tropical diseases that the Dutch settlers were suffering from in the newly colonized West Indies.

Many of today’s brands such as Chartreuse and Benedictine were born in the monasteries of Europe designed as stomach tonics and general elixir’s.

It was during the mid-1800’s where the boundaries between pharmacist and barkeeper blur.

Around 1824 a Creole apothecary in New Orleans, Antonie Pechaud started making and serving his own brand of digestive bitters, while at the same time over in Venezuela, German Doctor Johann Gottlieb Benjamin Sieger created Angostura.

During Prohibition in America, bitters were not banned due to them being classed a medicine and doctor’s were allowed to prescribe a certain amount of whiskey and brandy which were both listed as official drugs in the U. S. Pharmacopeia until 1919.

An interesting theory from Leblon Ambassador and all-round drinks guru Mr. Jacob Briars, is that the ‘cocktail’ had to include bitters, but that the bitters were not added to the spirit to make it taste more palatable, but that it was the addition of whisky/cognac/rum to bitters which helped the smooth passage of the astringent medicine: ‘For medicinal reasons’.

Today’s practice of drinking alcohol in bars as a restorative after a hard day’s work has exactly the same effect as it has always done; The irony is that we now live in an age where although alcohol is socially acceptable, classing it as ‘good for you’ is frowned upon and is a notion which seems to have been born from the development of modern medicine.

Old-fashioned pharmacies with their jars and carbouys of coloured macerations died out in the early part of the 1900’s when science was able to synthetically reproduce the key properties of nature therefore no-longer needing alcohol as a base. Drug companies have also been keen to brush over the fact that organic-based medicine is free whereas tablets are not. You can’t patent nature, whereas you can patent pills. 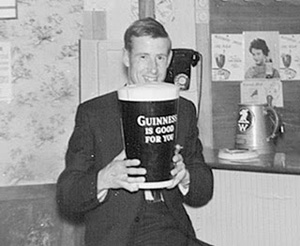 It was only in the 1930’s that Guinness was banned from making the claim ‘Guinness is good for you’ and only in the last few years that all alcohol advertising comes with ‘Drink Responsibly’ messages, bottles come with unit calculations and the government has issued recommended daily alcohol intakes for men and women.

In this age of paranoia, there are not many doctors willing to say that alcohol in moderation is good for you. However, there is one man that has made a career from it, Senior Consultant in Cardiology at Kaiser Permanente Medical Center in California, Dr. Arthur Klatsky. Klatsky has been leading studies on the relationship between alcohol and health since 1977 and writes and lectures specifically on the relationships of alcohol consumption to cardiovascular conditions.

“I believe in advising people about alcohol on a one-on-one basis. It’s very difficult for governments or public health officials to make broad, sweeping statements about alcohol consumption that apply to everyone.” But goes on to say that, “Abstinence can be hazardous to some persons health. If my patients can benefit from light drinking, I advise them to do so.”

He also exposes the myth that wine is better for you than other types of alcohol by the fact that coincidently wine drinkers tend to drink more moderately and also generally eat well and look after themselves much more than spirit and beers drinkers do.

As with any medicine, if you overdose on the prescribed recommended dose, you risk serious illness or potential death. Alcohol is no different and although the responsible drinking messages on alcohol feel very nanny-state, they are just reminders that the ‘medicinal properties’ of alcohol should be respected like any other drug…and I will drink to that!

Our annual round up of dates, days and events that may or may not be of interest to you. Now