The event was created by Ben Jones and Matt Lucey as part of a University Project and presented by The Liquorists. Now if there were ever a product that would work harmoniously with an Alice theme, there is surely none more suited than Hendrick’s gin.

Priding itself on being “rather unusual”,  it was almost destined to be married to the abstract and outright wacky realms that Lewis Carole created. Now I must admit, I am obsessed with Alice in Wonderland. Not only do I have the animated film on my I-Phone, I have read the book countless times.

This competition was a dream come true for me, and gave me a carte blanche to get obscure and unusual…There were 6 competitors in total, each of which brought some hefty concepts to the table.

There were gin flavoured cupcakes with a smoked tea cocktail, rose scented hand cream for the judges, trinkets labelled “drink me” and Oyster shells and more crockery than my nan’s cupboards!

Johnboy broke out a tea cup bigger than my upper body (I’m somewhat vertically challenged I might add) The esteemed judges were both Ben and Matt, and Mr Tom Sneesby of the Liquorists fame.All in all, this wasn’t going to be a walk in the park to say the least.

I had been conceiving my drink for about 2 weeks. The process I will usually follow consists of: Research the Brand, Develop a Theme, Build flavour profiles, be happy with a drink, decide my drink isn’t good enough, start again.. I’m a perfectionist, and I’m also my own toughest critic.

Late nights and innumerable attempts are part of any competition for me.But I knew this had to be my greatest presentation to date. I had to make something bigger and better than I had ever before. So I set about creating my masterpiece…I approached the bar dresses as the Mad-Hatter himself with the Mad-Hatters Tea Party song blasting out during my presentation.

There were several iconic parts of Alice I wanted to incorporate. I lay down in front of the judges a black & white check board with cut outs of the original illustrations of the White rabbit and the Mad-Hatter.

I also created a miniature version of the book, and on the front cover I had printed “Hendrick’s presents .. A Rather Curious Concoction… by Jamie Jones”; I think I have their attention.In the book Alice drinks the potion that makes her shrink and claims “it tastes of cherry-tart, custard, pine-apple, roast turkey, toffee and hot buttered toast”.

Quite a combination of Unusual flavours indeed, but a challenge that I would take on.. So I set about creating a custard of my own combining pineapple juice, cherry bitters, vanilla essence, toffee sauce and mixing it with cornflour to thicken it. I did at one point sprinkle stuffing over the top to add the roast turkey influence, but this didn’t work that well.. 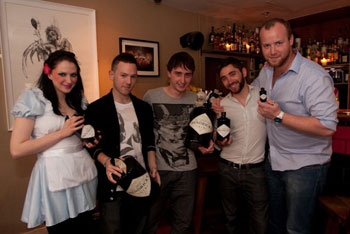 I decided that i would serve my custard in an espresso cup, much like the Mad-Hatters tea party. During this scene in the animation, the Hatter dips his saucer in his tea and eats it.

So I bought a saucer mould, melted a ****load of sugar with some Hendricks and fresh cucumber juice and left it to set.

A beautiful light green coloured saucer sat beneath the cup in front of the judges, unaware of the fact they would be eating it soon enough.

Now I didn’t want the process of eating the custard to be bland, so I invested in some edible playing cards. Printed on rice paper, the judges were encouraged to add a spoonful of custard to their card and eat it, which was met with a look of surprise and hesitation.

For the drink itself, I wanted to bring the Caterpillar and his hookah in to the story. I had delved deep in to the world wide web seeking a piece of glassware that would epitomise my drink; an Absinthe Pipe!

So in to a tea pot I added 20ml of homemade cucumber gomme, 2 dashes of grapefruit bitters, 50ml of Hendrick’s and stirred it all with ice. As I let this sit for a moment, I placed a pinch of dry Thyme in to a fine strainer and held it above my pipe and blasted it momentarily with a blowtorch.

This created a plume of smoke inside the glass to which I quickly poured my libation atop and presented to the judges with a token “clap” of my hands… “It tastes of drugs” was one comment that emerged. Not sure if that’s a good thing. As always, the judges retired to make their decision and keep up the tension and whispering in the room.

Upon their return their declared that the level of drinks was outstanding and it had been a tough decision, but there is a winner…So here is my prize, I get to write about myself for the world to read and think to themselves, “Alright mate, get over yourself”… Not an easy thing to do without sounding like a prick, but I did my best.

Jamie foolishly left the wording of his bio up to us. We would then take this opportunity to point out that while he is an excellent bartender, peerless host and notable bar operator, he has developed a worrying tendency to post pictures of small dogs on Facebook. Approach with caution.