Arctic Monkeys – Suck it and See

Arctic Monkeys were defiant, teenaged oiks when they blasted out of Sheffield and obscurity six years ago. 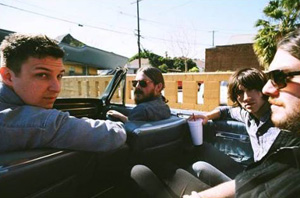 “You’re not from New York City, you’re from Rotherham,” acne-splattered front man Alex Turner jeered at the poseurs by whom he felt himself surrounded.

Skip to the present and both the main Monkey’s demeanour and his skin are considerably less inflamed – and he indulges in samey side projects and has a telly presenter for a girlfriend. You might fear he’s become all he once dismissed as wanky.

True, Turner crawls up his arse a bit on the crappily titled Suck it and See; there are several odes to his vacuous missus that teeter on the edge of hyperbolic bullshit. Alexa Chung is “thunderstorms”? Drizzle more like. Blokes ignore “topless models doing semaphore” whenever she walks by? Bollocks they do. But it’s a great line. And so is the description of the “type of kisses where teeth collide”.

This is proof that the fella can still turn a brilliant phrase, even if he no longer expresses any sentiment more profound than “I wanna rock ‘n’ roll”. Oh, well. He’d be taking the piss out of everyone – himself included – if he still sang about the highs and lows of working class life in South Yorkshire.

What lets down Suck it and See isn’t the vocals, then (Turner’s voice is maturing nicely, by the way), it’s the music. The whole thing smacks of a band in want of a new sound and settling on someone else’s.

Brick by Brick, All My Own Stunts and the lead single Don’t Sit Down ‘Cause I’ve Moved Your Chair are little more than pastiches of the superior Queens of the Stone Age (whose ginger monarch, Josh Homme, co-produced the Monkeys’ previous effort, the disastrous Humbug) – and most of the remaining tracks, particularly Piledriver Waltz and Love is a Laserquest, are heavily indebted to Richard Hawley, Sheffield’s answer to Roy Orbison.

Only Library Pictures sounds like the band of old. The closing tune, That’s Where Your Wrong, seems like it could herald a new direction… until you realise it bears an uncanny sonic resemblance to the Stone Roses’ She Bangs the Drum (which itself was/is hopelessly derivative).

So there you are: swirl it about your gob for a bit – but don’t swallow.

Lady GaGa – Born This Way: a lengthy, balls-bouncing mixture of the brilliant and the bland from the best-dressed representative of the US meat and fisheries industry. Not worthy of the hype, but recommended nevertheless.

Danger Mouse and Daniele Luppi – Rome: a lovely and largely instrumental collection of what could be best described as the soundtrack for an urban spaghetti western – with vocal contributions from Jack White and the surprisingly excellent Norah Jones.

Friendly Fires – Pala: the follow-up to a brilliant debut has more muscle but less agility. But there are yearning melodies and jittery guitar-funk amid the slamming, neon beats – and Live Those Dreams Tonight is contender for single of the year.