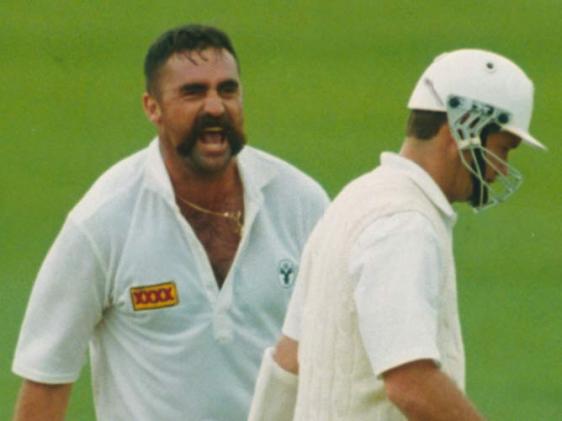 Tomorrow see’s the inaugural Cocktail Ashes taking place bought to you by Aussie Spirits, Bombay Sapphire and Coopers. This is the first cocktail competition in history to award extra points for the competitors not ‘shaking’ by serving out sledges.

In honour of this fine art we thought we’d give you our favourites to provide inspiration for the competitors and get the crowd in the mood.

Sledging has been taking place since cricket first began (although the term itself was apparently coined in Australia in the 60’s) and here are a couple of examples of early sledges:

Fred Trueman whilst bowling the batsman edges and the ball goes to first slip, and right between Raman Subba Row’s legs. At the end of the over, apologises sheepishly. “I should’ve kept my legs together, Fred”. “So should your mother,” he replied.

During the Bodyline series Englishman Douglas Jardine couldn’t take an insult. After complaining to Aussie captain Woodfull that a slips fielder swore at him while at bat, Woodfull asked his compatriots: “All right, which one of you bastards called this bastard a bastard?”

There is nothing like the mention of the Bodyline series to get the Ashes rivalries going and here are some of the best Aussie vs England sledges:

Rod Marsh’s welcome to Ian Botham is the stuff of legend: “How’s your wife and my kids?” Botham returned his own classic “The wife’s fine. The kids are retarded.”

Michael Atherton, on his first Tour to Australia was adjudged not out on a caught behind appeal. At the end of the over Ian Healey walked by and announced “You’re a fucking cheat”. To which the ever polite Athers replied “When in Rome dear boy…..”

The undisputed king of the sledge however was the Aussie legend Merv Hughes:

During one series he decided to target Graeme Hick – “Mate if you just turn the bat over, you’ll find the instructions on the other side.” And the next game: “Does your husband play cricket as well?’

Mike Atherton, a rather more robust victim, remembered: “I couldn’t make out what he was saying, except that every sledge ended with ‘arsewipe’.”

During a West Indies tour Merv was bowling to Viv Richards and whilst he didn’t say a word he stared at him after every delivery, finally Viv cracked. “This is my island, my culture. Don’t you be staring at me. In my culture we just bowl.” Merv didn’t reply, but after he dismissed him he announced to the batsman: “In my culture we just say fuck off.”

And my favourite Merv sledge:
On one occasion he was being hit all round the ground. Hughes stopped halfway down the pitch, and broke wind lavishly. “Let’s see you hit that to the boundary!”

Other top sledges from around the world include:

Ian Healy’s legendary comment that was picked up by TV microphones when Arjuna Ranatunga called for a runner on a particularly hot night during a one dayer in Sydney… “You don’t get a runner for being an overweight, unfit, fat c**t!!!”

Shane Warne had Daryll Cullinan’s number everytime they played however after they hadn’t faced each other in a couple of years and Warne had put on a couple of pounds he made the mistake of getting mouthy “I’ve been waiting two years for the opportunity to humiliate you in front of your own crowd.” Cullinan’s retort: “Looks like you spent it eating.”

But officially the worst sledger in the world is another Aussie, stand up and take a bow Mark Waugh… you muppet:

Mark Waugh to Adam Parore after he played and missed his first ball of a series, “Oh, I remember you from a couple years ago in Australia. You were shit then, you’re fucking useless now.” But Parore wasn’t pulling any punches: “That’s me, and when I was there you were going out with that old, ugly slut and now I hear you’ve married her. You dumb c*^t.”

As Jimmy Ormond came to the crease for his first ever outing against Australia, Mark (whose brother Steve was the captain) approached him with: “Mate, what are you doing out here? There’s no way you’re good enough to play for England.” Ormond shot back: “Maybe not, but at least I’m the best player in my own family.”

However it isn’t just the players that can put a smile on your face. Cricket commentators are without a shadow of a doubt the most entertaining in world sport and none more so than the BBC radio commentators. This moment took place when Ian Botham was batting for England many years ago……. Ohhh Aggers for goodness sake stop it…… (stick with it!)

Come along and support your country details here