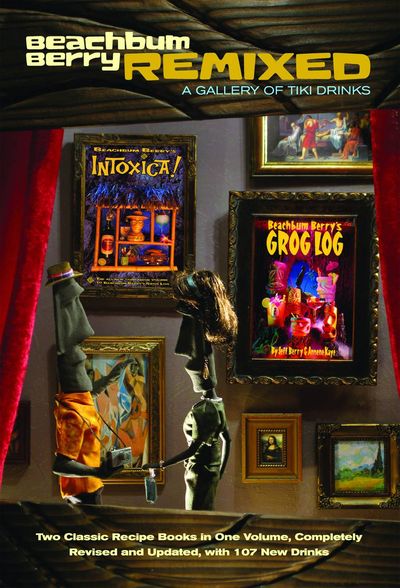 The Bum is back – We’re not talking about a new album release for Amy Winehouse but Jeff ‘Beachbum’ Berry’s new book – Remixed.

Some may argue that the phrase ‘New Book’ is false advertising seeing as how Remixed is in essence the combination of his 1998 title Grog Log and 2002’s Intoxia! These people, however, need to grab a Mai Tai sit down and actually read Remixed as Beachbum’s on-going mission to uncover the mysteries of the world of Tiki has led to a these original books being revised and updated with new discoveries and 107 new drinks to boot.

During his mission to discover the original recipes from the often secretive world of Tiki concoctions, Beachbum has uncovered stories from the days of Donn Beach and Trader Vic which pepper the pages. These tales rest alongside recipes that, without his tireless work, would have disappeared, never to be mixed again (not least the original Zombie recipe which has taken over a decade to uncover) and a host of new drinks from the man himself and other top bartenders.

A majority of the cocktail recipes come with Beachbum’s own thoughts or a description of how he tracked them down giving some great back stories to impart on inquisitive guests to your bar. There is also a series of recipes for syrups & liqueurs to help make the drinks even more traditional – BarLifeUK will be making some of these in coming weeks so check back to see how we did.

The section on the origin of the Mai Tai is worth the entrance fee alone. It’s a detective story with more twists and turns than the mating ritual of the King Cobra.

As we know part of the allure of the world of Tiki is the Polynesian art and history, the book doesn’t disappoint on this front either with a beautiful design full of pictures, posters and images featuring tiki mugs, cocktail umbrellas and girls in bikinis aplenty. It also gives you an insight into just how big the Polynesian scene was back in the 60’s such as the awesome sounding 12 acre “Tiki Gardens” Polynesian Theme Park featuring a “Polynesian adventure trail, eight fascinating shops, Trader Frank’s Restaurant,” and exotic creatures like “Chang the peacock.”

You will find that some of the sections are aimed slightly more at the home market than the professional side of things but that really is a very minor moan for a book which is as much fun to read as it is to drink (and believe me folks this is one hell of a book to drink!!).

The man himself is gracing these shores with his presence during The UK RumFest on October 16th & 17th so pop by and say Aloha or check out his very own website for the latest news on his adventures.

Below we have a little extract for you plus one of our favourite recipes from the book:

With its benumbing blend of rum, brandy, and gin, the Fog Cutter is the Long Island Iced Tea of exotic drinks. It doesn’t cut fog so much as put you in one, which even its inventor had to admit. “Fog Cutter, hell,” Trader Vic wrote of his creation, “After two of these, you won’t even see the stuff.”
Eventually Vic took pity on the befogged and replaced his 1940s original with the lighter Samoan Fog Cutter, diluting the original’s strength by blending it with crushed ice instead of shaking.
After the Mai Tai and the Scorpion, the Fog Cutter became Vic’s third most famous concoction. As such it was offered in many other restaurants, in many other permutations – not because Vic’s recipe was proprietary and rivals had to guess at it (as was the case with Donn Beach’s closely guarded secret potions), but because the version Vic published in his 1947 Bartender’s Guide provided a template that invited experimentation. A Scandinavian restaurant could make the Fog Cutter its own by floating Danish aquavit instead of sherry, while bartenders who preferred lime to lemon could make the switch with impunity.